Dr. Nancy Snyderman apologizes for scaring my community and the country' i

Dr. Nancy Snyderman apologizes for ‘scaring my community and the country’ in Ebola Quarantine violation, Back on Air 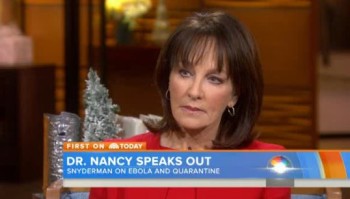 “I stepped outside the boundaries of what I promised to do and what the public expected of me, and for that I’m sorry,” Snyderman said on NBC’s Today this morning.

In her Dec. 3 on-air interview with Matt Lauer about the Ebola quarantine, Snyderman apologized: “I’m very sorry for not only scaring my community and the country, but adding to the confusion of terms that I think came as fast and furious as the news about Ebola did,”

She admitted that she and her team weren’t “sensitive” to the concerns about Ebola and that, in violating the quarantine, she had been “breaking a promise.” She added:

“I wear two hats — I have my doctor hat and I have my journalist hat, and when the science and the messaging sometimes collide, and you leave the optics, in this case a hot zone and come back to the United States, good people can make mistakes,” she said.

When asked if she would return to Africa to report on Ebola, she said, “I would go back tomorrow.”

In case you don’t remember, in October, Snyderman broke the voluntary quarantine, imposed after Ashoka Mukpo, a freelance cameraman working with Snyderman in Liberia, contracted the Ebola virus. He has since recovered.  Local news site Planet Princeton exposed Snyderman’s violation when it reported she had been seen in a car outside of a restaurant and one of the car’s passengers went inside to pick up take-out, as iMediaEthics has reported. Snyderman issued a statement confirming that “members of” her team broke the voluntary quarantine, but didn’t accept responsibility for personally breaking the quarantine.

Following the breach of quarantine, the New Jersey Department of Health ordered Snyderman and the rest of he team under a mandatory quarantine.

In late October, NBC News said that Snyderman would be back on the air in November after being given personal time with family.  But, Snyderman didn’t appear on air at all in November, prompting Gawker to ask if Snyderman had been fired.

The interview with NBC’s Today at least cleared that up, if little else.

Dr. Nancy Snyderman apologizes for ‘scaring my community and the country’ in Ebola Quarantine violation, Back on Air