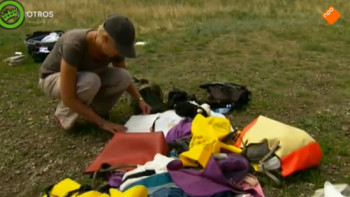 Caroline Van Den Heuvel reading a diary found in the luggage of a victim of the MH17 disaster. (Credit: video still via Geenstijl)

Dutch current affairs show EenVandaag apologized after its reporter Caroline Van Den Heuvel picked up and read from a diary of one of the Malaysian crash victims on flight 17 from Amsterdam to Kuala Lumpur.

English language news site NL Times described the item as a “travel journal”  but the Epoch Times said it was a “diary.”

Van Den Heuvel was criticized by tweeters for being “disrespectful ” and “disgusting,” according to The Epoch Times.  EenVandaag identifies itself as “the current affairs program on Radio Netherlands 1 and 1” broadcast on radio and TV.

Horrible what a Dutch reporter just did. Looking through the belongings of victims from #MH17 #1vandaag #eenvandaag

Even Dutch journalist @carolineheuvel has no respect for the #MH17 victims… going through their personal belongings #fail #NOS #eenvandaag
— Pierre Serné (@NetPierre) July 21, 2014

Editors of #eenvandaag take no responsibility at all and just blame it on the journalist. Crazy stuff, @eenvandaag.

“This was not as expected. Caroline is an experienced reporter who, in a war zone, must act in the heat of the moment. She did not want to hurt anyone. She was touched by the book that lay on the ground and had the intention to describe the chaos as accurately as possible. In it, she had gone too far.  On behalf of the main and final editing, we offer this apology.

iMediaEthics has written to EenVandaag for more information about Van Den Heuvel’s segment and the apology. We’ll update with any additional information.

Sky News and its reporter Colin Brazier apologized this past week after Brazier went through a victim’s suitcase at the crash site, as iMediaEthics has written.

The Australian Broadcasting Corp. re-edited a video segment to remove footage of its reporter Phil Williams picking up and lifting wreckage, such as an airplane seat and a victim’s scarf.