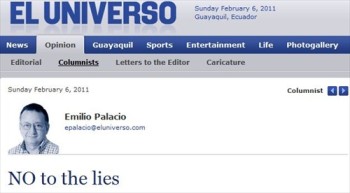 As we wrote in July 2011, Ecuador’s president Rafael Correa successfully sued four journalists from El Universo over its February 2011 article “questioning an army raid to rescue [the President] from striking policemen.”  The newspaper’s column, “No to Lies,” also labeled Correa a dictator.  The ruling in the initial libel case fined the newspaper $40 million and ordered each man to three years in prison.

El Universo claims that the judge’s original libel verdict was “written by Correa’s own lawyer, Gutemberg Vera,” the Committee to Protect Journalists noted.

But, the appeal for the case has now been put on hold, the BBC reported. It will be held on Feb. 10 now, according to Univision.

The hearing is to be significant, according to the Committee to Protect Journalists, which noted:  “The verdict, if upheld by the high court, could bankrupt the newspaper, put its managers in jail and send a chill quashing dissent for years to come.”

According to a Jan. 24 BBC report, the Ecuador National Court of Justice  “suspended hearing an appeal lodged by newspaper editors” because one “judge fell ill.”  Because of the suspension, “the case will now be heard by a newly constituted national court, which takes office on Thursday.”

Correa “indicated” he would drop his lawsuit in exchange for an apology, according to the BBC.  One of the three owners of El Universo, Carlos Perez, said the newspaper would apologize if the Ecuadorian government would “cease all lawsuits against journalists…and comply with the law regarding public access to information.”

However, CNN noted Correa suggested he wouldn’t accept the apology with the newspaper’s requests.  “If apologies are requested, it is because they made an error. And he who made a mistake, what right does he have to set conditions,” Correa is quoted as saying.

Christian Science Monitor noted that Correa has “sued other journalists and created new media laws.”  Correa argued that his lawsuits “put a check on a sensational private [media] industry.”

As we have written, in a Jan. 12 editorial, the Washington Post accused Correa of “the most comprehensive and ruthless assault on free media underway in the Western Hemisphere,” among other things.  Correa has called the Washington Post unethical and biased over that editorial.

We have written to El Universo asking if the newspaper has any comment on the case. We will update with any response.