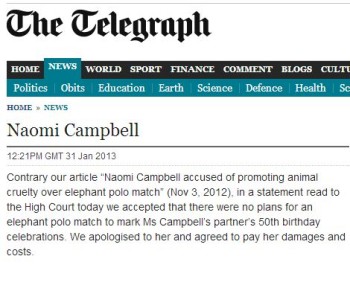 The story “falsely claimed she was planning an elephant polo match in India for her partner’s birthday” and “included criticisms from animal-welfare activists,” according to the Associated Press.

In its Jan. 31 statement, published on its website, the Telegraph didn’t explain how the error occurred but reported on the suit. The apology reads:

“Contrary our article ‘Naomi Campbell accused of promoting animal cruelty over elephant polo match’ (Nov 3, 2012), in a statement read to the High Court today we accepted that there were no plans for an elephant polo match to mark Ms Campbell’s partner’s 50th birthday celebrations. We apologised to her and agreed to pay her damages and costs.”

According to the Guardian, Campbell’s lawyer, Gideon Benaim, said the Telegraph “made no effort to contact Campbell before publishing” and Campbell commented that the “allegations should not have been published.”