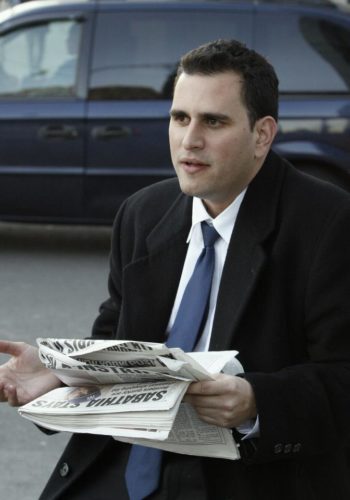 Both dubious sources were quoted by other news outlets from Deutsch’s Newsday coverage. Newsday declined to comment to iMediaEthics beyond its Feb. 28 statement that, “We are still reviewing Mr. Deutsch’s work from the four years he worked for Newsday, from 2012 to 2016.”

iMediaEthics reported yesterday that the Times admitted in an editor’s note appended to Deutsch’s story about drug use on Long Island that it also couldn’t track down two sources in Deutsch’s story, after being called during the Baltimore Sun‘s investigation of questions surrounding his book, Pill City. Deutsch defended his sources as real and his reporting as accurate to the Sun, the Times and iMediaEthics. He provided no evidence to iMediaEthics to support this claim of accuracy and good faith.

iMediaEthics has again contacted Deutsch to ask, again, for specific evidence to support his Newsday reporting. We will update with any on-the-record information.

After publication, Deutsch wrote to iMediaEthics standing by his work but without providing specific evidence or responses to our questions.

“For me, journalistic ethics are sacrosanct. They’ve remained so throughout my nearly fifteen-year criminal justice journalism career–a career I’m extremely proud of. To suggest that I would violate journalistic ethics in any sense is wrong. Journalism is my life. I stand behind every word I’ve written.

“I’ve provided all notes from my coverage of the Orlando nightclub shooting to Newsday, and I’m cooperating fully with reviews of my work. I’m eager to show all my stories have met the highest standards of journalistic ethics.
“In response to the stories you cite:  These sources provided their names and quotes as they appeared in my stories, verbatim. I had no reason to doubt their veracity. Again, I stand by all of my reporting.”

iMediaEthics quickly found problems with his reporting in two Newsday articles on the Orlando nightclub shooter, Omar Mateen. Deutsch was then a criminal justice reporter for Newsday.

iMediaEthics used sources’ work, school and other affiliations identified by Deutsch to fact check the existence of sources described and quoted in his reports.

Deutsch’s scoop, to supposedly find a schoolmate and a co-worker of the shooter, was impressive and his Newsday interviews were widely quoted by other news outlets (who apparently copied and pasted instead of fact checking, following Newsday’s lack of verification steps).

The June story, “Orlando shooting suspect showed signs of violence, reports say,” reported an interview with a man identified as a “colleague” of Mateen’s at the private security company G4S, Eric Baumer. Deutsch reported that Baumer’s “security guard shifts at the PGA Golf Club at PGA Village overlapped with Mateen’s in 2015.”

“When I saw his picture on the news, I thought, of course, he did that,” Baumer reportedly said. “He had bad things to say about everybody—blacks, Jews, gays, a lot of politicians, our soldiers. He had a lot of hate in him. He told me America destroyed Afghanistan.”

The Daily Beast even re-published that quote, citing Newsday’s apparent get.

Problem? iMediaEthics contacted G4S and it says they never had an employee with that name.

“We have no record of an employee (current or former) named Eric Baumer (or close variation),” Monica Lewman-Garcia, the Communications Director for G4S Secure Solutions – North America, told iMediaEthics by e-mail. 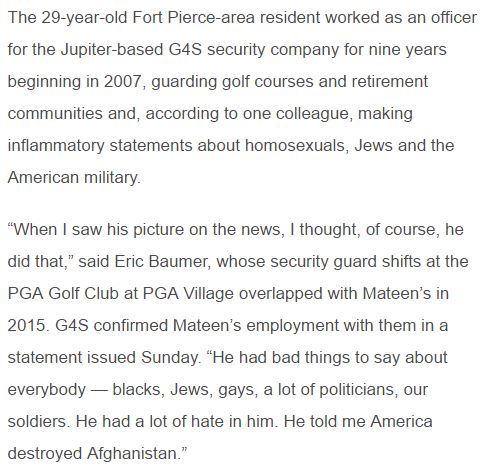 A screenshot of Kevin Deutsch’s article quoting an Eric Baumer.

(On March 21, nearly three weeks after iMediaEthics’ story was published, Newsday published a correction removing classmate from the headline.  More on this below.)

Quotes from Deutsch’s impressive interview with Khan didn’t only end up in Newsday. The Miami Herald‘s Fred Grimm reported:

“We have no record of a student named ‘Aahil Khan,'” Booth told iMediaEthics.

Since there is no evidence that an Aahil Khan attended school with Mateen, he is missing,  just like the two sources for Deutsch’s Times story.

Deutsch never bothered to fact check Khan’s existence with the Martin County School District or the claims he made about Mateen’s time in high school; iMediaEthics has learned from a district representative who kept a list of what reporters contacted for information, Deutsch never contacted it. We asked Deutsch to provide any evidence he contacted the Martin County School District to verify or collect facts. The list itself indicates the answer is no.

A screenshot of the Newsday article on Omar Mateen’s supposed classmate.

The Martin County School District staff attorney Kim Sabol provided a list of 24 other reporters who had made public records requests.

Sabol also provided iMediaEthics with all disciplinary records related to Mateen, which we have uploaded here. The records confirm the shooter was, in fact, suspended a total of 48 days including a suspension for an “Other Rule Violation” in mid-Sept. 2001, as claimed in media reports, including CBS News.

The Miami Herald‘s Nicholas Nehamas, who is bylined for other stories about Mateen, was on the media list, however.

So, despite the fact Khan didn’t attend school with Mateen, the fake news that he was a “classmate” circulated without a fact check.

The story also cited interviews with “gym-goer Jason Hart of Port St. Lucie” and “worshippers” at the Islamic Center of Fort Pierce, including Saeed Afzal of Fort Pierce.

iMediaEthics has contacted the gym, Gold’s Gym, and the Islamic Center, to verify the existence of these people. We are waiting for responses and will provide updates.

The New York Daily News‘ editor-in-chief Arthur Browne confirmed with iMediaEthics by e-mail, last night that “Kevin Deutsch worked at the Daily News from 5/2011 – 3/2012. All of his stories are under review.”

This review, if done right, will be a mind-numbing undertaking as the Daily News website shows a total of 572 stories with Deutsch’s byline. 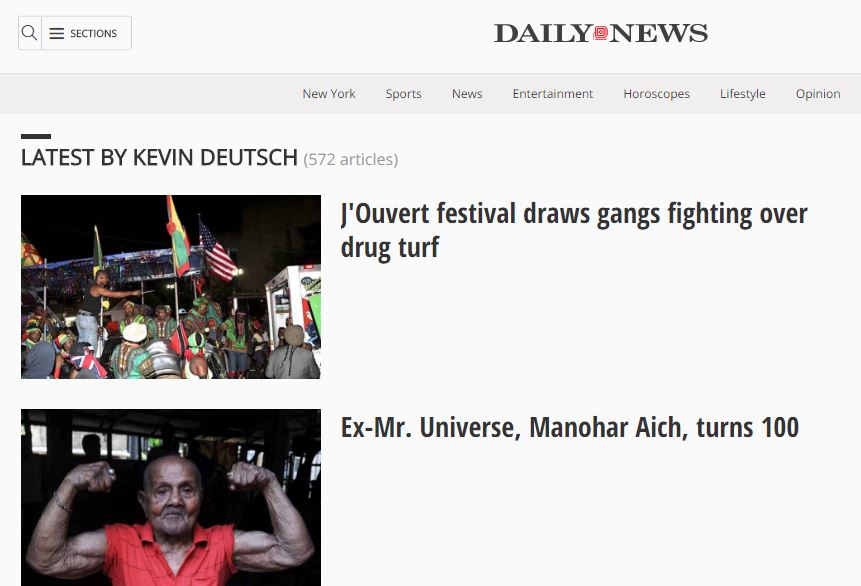 Kevin Deutsch wrote 572 articles for the Daily News, according to its website.

Before his reporting for the Daily News, Newsday, or the New York Times, Deutch wrote for the Miami Herald. We asked if they are planning to review his work.

Miami Herald executive editor Mindy Marques Gonzalez told iMediaEthics, no. “Given the nature of his assignment and the time that has elapsed, we are not planning to review his work at this time,” she wrote.

Gonzalez explained, “In looking over our archives, it appears that Kevin Deutsch worked for the Miami Herald in our (then) Broward Bureau as a breaking new/police reporter from May 2003 through October 2005. He wrote almost exclusively crime and breaking news stories and briefs. We don’t keep personnel records this long.”

iMediaEthics has contacted editors for the Riverdale Press and Palm Beach Post, two other outlets where Deutsch was on staff, to ask if they are reviewing his work.

In a New York Observer opinion piece Deutsch compares himself to journalism’s rogue’s gallery –​Stephen Glass, Jayson Blair, Janet Cook — but with a difference. He says he is innocent.

Meanwhile, NY Daily News and Newsday’s reviews continue. ​iMediaEthics will have another review of his stories published soon.

Here is what we sent Observer editors seeking corrections for errors in his piece.

In fact, his own article states Baumer was a “colleague”… “whose security guard shifts at the PGA Golf Club at PGA Village overlapped with Mateen’s in 2015.​”​

​Mateen worked for G4S. G4S had no record of ​a “​Eric Baumer,​”​ as we reported. We specifically asked Deutsch about Baumer before publication and have heard zero complaints from him regarding this matter until reading ​his Observer piece.

2. ​Deutsch stated iMediaEthics made an error in calling Khan a classmate and​ we​ refused to correct.

​Untrue. ​iMediaEthics asked Deutsch before publication about the classmate claim and the fact the school districts had no record of Aahil Khan. He did not respond. An hour after publication, he sent a blanket statement defending his work. An hour after that, he sent in a correction request, claiming only the Newsday editors called him a classmate ​in the headline ​and he didn’t.

We asked if he requested a correction in the nine months since publication, if ​it was Newsday that erred. He claimed he was too busy. We informed him that if Newsday posted a correction that confirmed Newsday, not Deutsch, characterized Khan as a classmate we would​ publish it ​. We have asked Newsday several times since then if Deutsch has requested any correction since our story, and are awaiting a response. Newsday is still reviewing his work. There is no correction on the article currently. (Update: Nearly three weeks after iMediaEthics’ story was originally published, on March 21, Newsday posted a correction. More on this below.)

3. Deutsch ​falsely ​stated we flat-out called his sources “non-existent sources.” This is incorrect. We were very clear to say ​as in the story above​ (emphasis added): “iMediaEthics’s preliminary investigation of Deutsch’s Newsday coverage of the Orlando Pulse nightclub shooter, Omar Mateen, already reveals evidence of the same problem in Deutsch’s Times story — namely, quotations from what appear to be non-existent sources.”

5. In addition, Deutsch claims that it is standard for sources in addiction/drug stories to give false identities​ . It is ​also a journalism ​standard to disclose ​ when​ ​fake names are being used and does not preclude the requirement for fact-checking what you are told– an easy one would have been be the nephew’s death (in the Times story​). ​​Especially for a crime reporter, to simply say he had no reason to doubt and just repeated what people told him goes against the most basic journalism training — to even doubt your mother and fact check her claims.

Kevin Deutsch in his Newsday article about the Orlando Pulse shooter called Aahil Khan a “childhood friend” of Omar Mateen and quoted him telling tales from school with the headline calling him a “classmate.”

Deutsch still hasn’t provided ​to iMediaEthics ​any information about where he met Khan or how he verified his source’s account.

iMediaEthics asked Deutsch about the classmate ​characterization before publication and received no response until after publication when he stated Newsday inserted an error in his story headline and that he never called Khan a classmate. As we informed Deutsch at the time, if Newsday added a correction admitt​ing that ​Newsday not Deutsch called Khan a classmate, we would post a correction to this article. Today, Newsday issued a headline correction stating:

[Newsday, March 21,2017]​
“CORRECTION: This story previously appeared with an incorrect headline that identified a source differently from what appeared in the story. The story identifies the source as a friend, not a classmate. This story was written by former Newsday reporter Kevin Deutsch; the headline was not. Newsday is reviewing this story, and all of Deutsch’s work from the four years he was employed at Newsday, after questions have been raised about the accuracy of a nonfiction book he wrote about Baltimore’s drug culture called “Pill City.” When the review is complete, Newsday will report the findings.”

iMediaEthics has ​updated text in this story to reflect Newsday’s headline correction.