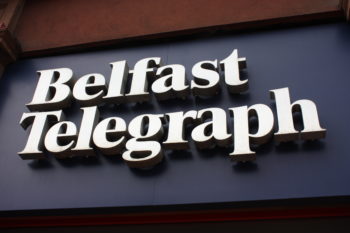 It was OK for the Belfast Telegraph to report on the same-sex civil partnership of two women, even though the women said they hadn’t officially gone public about their sexual orientation, the UK press regulator the Independent Press Standards Organisation decided. The women complained that the article was an invasion of privacy, since the focus was on one of their fathers.

The hook for the Telegraph‘s story was that the father of one of the women is a senior member of the Orange Order, a Protestant fraternity which is anti-same-sex marriage and has called it a “moral decline.” The Telegraph reported that the father walked his daughter down the aisle, included photos of the two women in their wedding dresses, and quoted other Orange Order members about the man’s attendance.

The Feb. 2018 story was headlined, “Orangeman is backed after attending daughter’s same-sex civil ceremony.” iMeddiaEthics has written to the women seeking comment on the ruling.

The Telegraph defended its report as in the public interest given the contrast between the Orange Order’s position on same-sex marriage and the father’s high position in the organization. Further, the Telegraph told IPSO it was a positive story, noted the father gave a comment about the wedding to another news outlet, that the photo was taken in public outside, and that the couple published their own photos from the ceremony on public social media accounts.

IPSO agreed with the Telegraph that the article and photo were fine because there was a “genuine public interest in reporting on the attendance of a high profile member of the Orange Order at the event, given the organisation’s comments on same-sex relationships.” IPSO also said it was fine to publish the photo since it was taken in public, didn’t contain any private information, and similar photos were published on social media.  Further, IPSO ruled that “a marriage or civil partnership is a public declaration of a relationship.”

“The fact of the complainants’ civil partnership was in the public domain and was not information about which they had a reasonable expectation of privacy,” IPSO ruled, rejecting the women’s complaints.