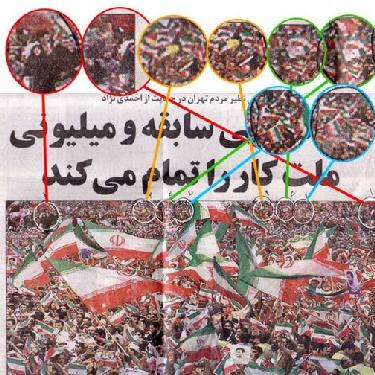 The pro-Ahmadinejad rally photo shown above is definitely Photoshopped. The circled areas, which magnify crowd details, indicate Photoshop "cloning" aka, copying and pasting areas to expand the audience. Our recent report about a Scientology crowd photo (Dec 1999) discussed the use of same cloning technique to fake a larger audience.

The badly Photoshopped photo above, allegedly shows a pro-Ahmadinejad rally. The circles illustrate areas where the audience was multiplied via copy and pasting–called cloning in Photoshop–allegedly to increase the crowd size.

“Frostbite” comments on Gawker: “They just have one of their pundits report that 10,000 people showed up, the media reports it as fact.  But, the local police estimate the totals as 2,400.”

Quite fairly, but gussied up in Gawker sarcasm, Snyder wrote, “We have no idea where it’s from (anyone read Farsi?) but everyone’s screaming propaganda! Which it probably is! But the Internet is full of fake s__t, which people mostly (if they’re smart) just ignore.”

Snyder continues, using cautionary language, “As near as we can tell, this crowd photo first showed up on a blog belonging to an Iranian photographer (that’s because one of the only English words on the site is ‘Photographer’).

All the blogs reviewing this image, including Gizmodo, DailyKos and Boing Boing, in addition to Gawker, contextualize this new Iranian fake photo along with the more famous Iranian missile photo debacle last year that led to numerous US newspapers making corrections.

Snyder writes in an “Update” that an “Iranian reader kindly sends in this translation” of the article that accompanies the doctored image :

“At the very top of the paper: ‘People’s Support in Tehran for Ahmadinejad’ And main text: ‘And another interesting debate which was about to be hidden from our eyes. Yesterday in Keyhan paper (state paper) in the first page had this photograph and in this manner he tried to publicise a massive support for himself.’ ” Go to Synder’s article for the full translation, here.

StinkyJournalism has reported on two other cases where cloning techniques were employed to increase audience size for propaganda purposes here in the US. See here and here.

UPDATE: 06/18/09: 3:20pm EST: The Snappshot blog credits a German newspaper for discovering the faked crowd photo. Brian Ledbetter writes: “The German magazine Berlingske has discovered that Mahmoud Ahmadinejad’s supporters in Iran have been fudging the coverage of the pro-Mahmoud rallies in Tehran.”