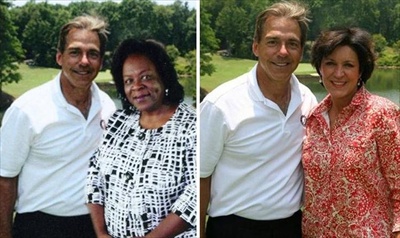 On the left, see Dorothy Davidson's doctored campaign photo, which Photoshopped Davidson into the original photo on the right, of Alabama football coach Nick Saban and his wife found on his charity's web site. (Credit: Birmingham News, Nick's Kids)

iMediaEthics often writes critically of news organizations for letting fake photos slip through editors and make it into print or online publication.

But, Alabama’s Birmingham News skeptically approached a photo that implied a political endorsement and outed the fakery.  iMediaEthics has written to Birmingham News writer Anita Debro for more information about the newspaper’s discovery.

“Nick Saban fully supports Dorothy ‘Dot’ Davidson, and thinks she would be an excellent mayor for the City of Bessemer.”

Initially, Davidson said the picture was a real photo from late July.  But when she was shown the original photo of Saban and his wife, she said that his campaign said it was OK for her campaign to switch the photo.  “They said we could do it this way,” The Birmingham News reported that Davidson said.

The original photo can be found on Saban’s and his wife’s charity website, Nick’s Kids Fund.

Davidson, currently a city council member, is one of six candidates running for Bessemer’s mayor position.  Bessemer has a population of about 28,000, The New York Times reported.

Debro reported that “Morris maintains he did talk to Saban about Davidson and asked for his support.”  While Saban didn’t give an official endorsement, Morris said his father and Saban are “close” friends and Saban is supportive.

However, Yahoo News reported that University of Alabama’s athletic department says Saban hasn’t “been contacted for a political endorsement of any kind.”

Regarding Morris’s fake claims of endorsement and the photo, Davidson said she was “disappointed,” and that ““I’ve been hurt all day,” according to The Tuscaloosa News.