Famed Khrushchev Shoe Banging Story Long In Doubt: Then Why the Heck Do Media Outlets Keep Citing it as True? 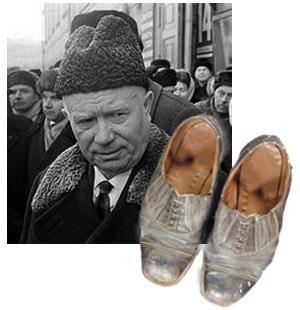 SHOULD JOURNALISTS QUESTION OR TRUST "COMMON KNOWLEDGE"? : Everyone seems to have heard about the famed incident. Khrushchev dramatically banging his shoe in anger at a 1960 United Nations session...the problem is, for many years, this "common knowledge" has been placed in doubt. There is no photo or other definitive evidence that proves this dramatic moment ever occurred. Image above shows the former Russian leader with a pair of his actual shoes.

Assumptions about common knowledge can be very dangerous. As the saying goes, a journalist even needs to check “if his mother loves him.” It means that reporters need to test everything – even common knowledge-  before presenting it as fact.

Case in point: After an Iraqi journalist hurled his shoes at the head of former President George W. Bush during a December 2008 press conference, many media outlets cited an earlier political incident involving shoes. From the lede of an L.A. Times article: “Shoes make news surprisingly often. Think Soviet Premier Nikita Khrushchev at the U.N. General Assembly in 1960, brandishing his shoe at a Filipino delegate who was accusing the U.S.S.R. of imperialism in Eastern Europe.” A Times (London) article says, “October 1960 Nikita Khrushchev, the Russian leader, bangs his shoe on a table at the UN after being accused of imperialism.” Which was it – did he “brandish” his shoe? or did he “bang” it on the table?

The details surrounding the incident are not clear. Johnny Phillips of the News Herald says different news outlets, assigned “three completely different dates and historical circumstances.” Phillips cites “eye-witness” accounts of the event that vary greatly. Some say he never removed his shoe, others say he threw it, others still say he banged it on the desk.

In 2000, Khrushchev’s granddaughter – fed up with being asked repeatedly about the incident – decided to set the record straight. “It has been 40 years,” she said, “Why are the versions so different? And there are no pictures! What if it had never happened?”

After the Bush shoe incident, the Toronto Star tried–but failed – to avoid making an error. They still made a factual error by only briefly referencing the Khrushchev antics: “Nikita Khrushchev famously banged his shoe on the desk of the United Nations.” But whether or not the shoe was banged on the table is a disputed fact.

The only verifiable fact is that Khrushchev did something involving a shoe in 1960. Since the whole truth is unknown, reporters need to use qualifying language to clarify that when referencing the event. Using qualifying or distancing language should be the regular practice whenever reporters reference a “common knowledge” event of which the truth is not completely known.

In addition to the way the event should be qualified in the future, news outlets need to go back through their records and correct any previous references to the incident. Phillips is not wrong to suggest this, as the New York Times set the precedent by correcting 12 years worth of stories that erroneously called Senator McCain a “fighter pilot.” Every story from the 12 year period was corrected.

UPDATE 02/07/09: Mainstream media reported doubts about this story for many years. See 2003 report in the International Herald Tribune:  “Did he bang it?: Nikita Khrushchev and the shoe,” by William Taubman, professor of political science at Amherst College and the author of “Khrushchev: The Man and His Era” July 26, 2003.