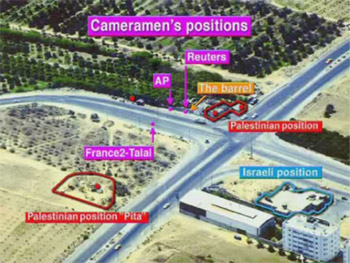 From the Weekly Standard, L’Affaire Enderlin: Being a French journalist means never having to say you’re sorry by Anne-Elisabeth

“France 2, dragging its feet, eventually produced 18 minutes of film. (There is practically no such thing as ‘contempt of court’ in such circumstances in the French judicial system.) The showing of this film made for an eerie moment at the trial, when the hitherto blasé judges sat up and started watching with more attention, then took a recess, after which they asked for all of France 2’s footage. It would prove to be the turning point in the proceeding…

“You could see Palestinians being carried on stretchers into ambulances, then coming out again unharmed, all in a kind of carnival atmosphere, with kids throwing stones and making faces at the camera, despite what was supposed to be a tense situation. The tape showed occasional gunshots, not continuous firing. From the general horsing around captured on film by Abu Rahmeh, Mena concluded that the whole scene must have been staged.” » more