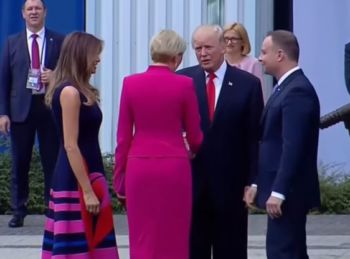 “Handshake trouble” or “fake news”? That is the question. As it turns out, Agata Kornhauser-Duda, the wife of Poland’s president, did not snub U.S. President Donald Trump’s handshake attempt in Warsaw, Poland last month, according to the unedited video of their meeting. But a misleadingly edited video published by the Guardian made it appear so, according to Guardian readers editor Paul Chadwick.

In his column investigating the misleading video clip, Chadwick called for journalists to be careful to avoid fake news and to quickly “admit and correct significant error” to maintain reader trust.  “Trust is hard-won, easily lost,” he wrote. “In the continuous effort to maintain credibility – as well as commercial viability – institutional journalism needs to be vigilant to avoid cases like the snub that wasn’t. When they happen they need to be corrected frankly and quickly.”

Kornhauser-Duda’s husband, Polish president Andrzej Duda, tweeted in early July to complain about claims that Kornhauser-Duda didn’t shake Trump’s hand. “Contrary to some surprising reports my wife did shake hands with Mrs. and Mr. Trump @POTUS after a great visit. Let’s FIGHT FAKE NEWS.”  iMediaEthics contacted the Polish President’s press office to ask if Duda or Kornhauser-Duda’s representatives made any complaints about specific media coverage of the alleged snub. In response, we received an e-mail stating, “The Chancellery of the President of the Republic of Poland will not comment on this type of journalistic report.”

Contrary to some surprising reports my wife did shake hands with Mrs. and Mr. Trump @POTUS after a great visit. Let's FIGHT FAKE NEWS.

The Guardian attached a footnote to its online video compiling Donald Trump’s handshakes. The footnote reads, “Footnote: An earlier version of this video included handshake moments between Trump and Poland’s first lady which, in the context, were misleading.” iMediaEthics contacted the Guardian to ask when the correction was appended and if any other articles or videos were corrected because of the handshake error, but the Guardian declined to comment.

The Guardian wasn’t the only outlet to err in reporting on the handshake. Rumor-debunking website Snopes noted that Newsweek and Vanity Fair, among others, posted stories claiming Kornhauser-Duda ignored Trump. Vanity Fair posted an update to its article stating, “This article has been updated to reflect that President Trump and Kornhauser-Duda did eventually shake hands.”

Newsweek posted a lengthy update reading, “An extended video of the encounter during which President Donald Trump reaches out his arm to the first lady of Poland shows Agata Kornhauser-Duda eventually shaking the president’s hand, after initially passing him by in favor of greeting first lady Melania Trump. The mildly awkward and humorously relatable exchange was just that, and no apparent swipe at the U.S. president. Trump also shook German Chancellor Angela Merkel’s hand on Thursday afternoon, after months of anticipation following their White House meeting, when Trump did not take up Merkel’s offer to shake hands in front of the cameras.”