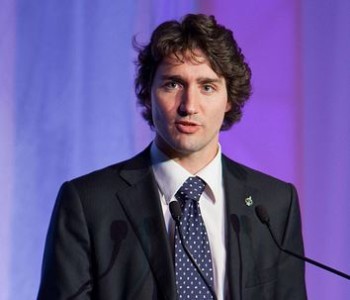 Canada’s Sun News Network host Ezra Levant mocked politician Justin Trudeau and his parents after Trudeau, the leader of Canada’s Liberal Party, posed for a photo with a bridal party and kissed the bride on the cheek. Trudeau’s father is former Canadian prime minister Pierre Trudeau, who served from 1968 to 1984. He died in 2000.

During a “five-minute rant,” Levant called Trudeau’s father a “slut,” and said that Trudeau’s mother “didn’t like to wear panties back” in the ’60s and 70s, Canada’s National Post and Huffington Post reported. Levant also said that Trudeau’s parents were “promiscuous” and “didn’t even pretend to keep their oaths to each other,” Canada.com reported.

“To Trudeau it’s always about him. When it comes to women, too, they’re for his use,” Levant added further stating:

However, Trudeau’s spokesperson Kate Purchase explained that the groom and groomsmen asked Trudeau to take pictures. “Mr. Trudeau asked if he could kiss the bride on the cheek, and she happily agreed,” Purchase told the Huffington Post.

Trudeau’s office said that it wouldn’t “engage with Sun Media” until Sun Media rectified the segment, which “crossed the line by airing a persnal attack on the Trudeau family that was offensive, and breached any reasonable measure of editorial integrity.”

“We have raised this issue with the appropriate people at Quebecor Inc., the owners and operators of Sun News Network, and have asked that they consider an appropriate response. Until the company resolves the matter, the leader of the Liberal Party of Canada, Justin Trudeau, will continue to not engage with Sun Media,” Trudeau spokesperson Kate Purchase told the Toronto Star.

Sun News apologized Sept. 29  to Trudeau for being “offensive” in its criticism. Sun News said

“In a monologue that aired September 15, 2014, on The Source, host Ezra Levant criticized Justin Trudeau for ‘photo-bombing’ a bridal party. In this monologue he detailed a number of controversies involving Justin Trudeau’s parents and their marriage,” the network said in a statement Monday.

“It is the view of Sun News that this segment was in poor taste and should not have been aired. We understand why many viewers found both the content and language of this segment to be offensive.

“We apologize to Mr. Trudeau, his family and to our viewers.”

Sun News’ Kory Teneycke told iMediaEthics by e-mail that the apology statement from Sun News was “broadcast and posted online.”

iMediaEthics asked Sun News if Levant apologized for the segment, if Sun News is taking any steps to prevent Levant from airing any future offensive comments and if his comments were scripted. Teneycke responded, “The apology speaks for itself.  We have no further comment.”