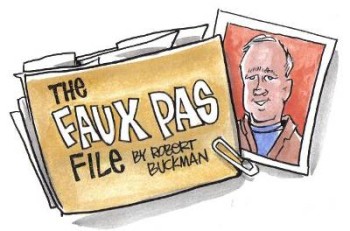 Today is Robert Buckman's inaugural column on StinkyJournalism. Buckman,Ph,D., is an associate professor at University of Louisiana at Lafayette and a member of the SPJ Ethics Committee.

What a character! Literally.

I refer to the tilde, aka, “the little squiggly thing over the “n” in Spanish. In fact, the “ñ” is a separate character in the Spanish alphabet, with a distinct pronunciation, and it’s one that English-language print and broadcast journalists would do well to use correctly.

Case in point: Last Thursday’s presidential inauguration in Chile, which was made more newsworthy than usual outside the region because the ceremony was rattled by aftershocks from the devastating earthquake on Feb. 27.

His name is Sebastián Piñera, which is correctly pronounced peen-YAIR-uh; Pinera would be pronounced “pea-NAIR-uh.”

Hundreds of U.S. daily newspaper blindly repeated the error, as did the Web sites of CNN, Fox News and CBS News (I checked). MSNBC used an AP report by Michael Warren the day after the inauguration. No tilde.

However, I recall Diane Sawyer pronouncing it correctly on her ABC broadcast Thursday, but ABC’s Web site also got it wrong in the text report and captions . My own daily newspaper got it wrong, despite my tipping off the metro editor the day before that they had gotten it wrong when Piñera won the runoff in January.

I did some more spot-checking of Web sites, and found that The New York Times and the Miami Herald got the name right, even putting the accent mark on “Sebastián.”

Then I checked The Dallas Morning News, to which I have sold numerous freelance stories on Latin American elections, and saw that it carried the AP story on the inauguration, written by Michael Warren.

To my surprise, the name was spelled correctly! Did that mean the AP was getting it right and local papers were getting it wrong, or did it mean that the International Desk at the Dallas Morning News is just Spanish-savvy and corrected it?

So I queried my colleague Tim Connolly, the DMN’s international editor, who explained: “the ap doesn’t do accents. We have been adding them at the DMN since the mid-‘90s.”

But what about tildes, I shot back. Connolly replied:

“No, no tilde from the ap. Actually, none of the wire services provide the marks, including the nytimes. We occasionally see stories that probably once had them, but they are stripped out or changed in transmission somehow. For example, the other day a story from the washpost carried the byline Ernesto Londopo, or something like that, instead of Londoño — a sign that it was sent with a tilde but was changed in transmission. I think that when things are sent across different systems, they don’t translate and so the marks are usually just left off.”

Perhaps so, but if The New York Times, the Miami Herald and the DMN, plus the newsmagazines, can get it right, then other papers should, too. It’s not a trivial issue, and is certainly not limited to the spelling of Piñera.

A few years back, I got tired of seeing headlines in my local daily newspaper about “El Nino,” and so I taught my colleagues how to do the “ñ” on their Mac (which is what I’m using now) so they could correctly have “El Niño.” You just depress the “option” and the “N” keys simultaneously, release both, then hit the “N” again, and you’ve got your “ñ.”

It’s much more cumbersome to do foreign characters on a PC. You have to hit “control” and “alt,” then punch in some three- or four-number code, and they are hard to memorize. My students just showed me on the PCs in one of our writing labs that there is now a “symbols” function you can go to and click on the character you want, although it takes awhile to find it amid the hundreds of characters.

Last year I was forced to revise my reference book on Latin America, which of course is rife with accents and tildes, on a PC, and it took much longer than it does on my Mac. (Steve Jobs ought to be paying me an honorarium for this!)  But it can be done. Learn how! In the days of hot type, there was a valid excuse for not using the correct characters, but in this computer age, there isn’t.

The issue goes beyond “El Niño,” too. Recipe stories should say jalapeño, not jalapeno. And you broadcast people should learn to pronounce it correctly! Too many people pronounce the name of that fiery little pod “ha-la-PEA-no.” Gross!  It’s “ha-la-PANE-yo.”

Sportswriters, the former golfer’s name is Lee Treviño, not Trevino.

You may dismiss this as the rantings of a perfectionist, but in journalism we’re supposed to get things right, and Pinera and El Nino are just plain, dead wrong. Having a good Spanish-English dictionary handy in the newsroom would be a good start, especially if your news organization has a sizable Hispanic audience, as the New York Times, Miami Herald and Dallas Morning News do.

Moreover, failure to use the correct character can have disastrous consequences. No, I’m not exaggerating. If you have to report on an upcoming New Years Festival in your local Hispanic community, be damn sure you call it “Fiesta de Año Nuevo” and not “Fiesta de Ano Nuevo.”

Why? Because “Fiesta de Ano Nuevo” means “New Anus Festival.”
That will have your Hispanic community guffawing at your newspaper for years!