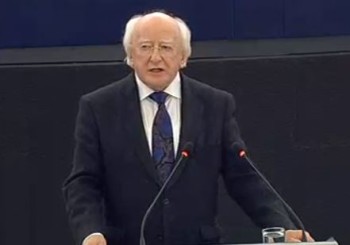 As iMediaEthics previously reported, Monagan, an American writer living in Ireland, made the error in a July 23 article about Samantha Power.  Forbes unpublished the article and replaced it with an Editor’s Note and Correction apologizing to Higgins.

Monagan explained that he confused Higgins — who Monagan said he voted for — with one of Higgins’ opponents in the race for president, David Norris — who is openly gay.  Monagan attributed his error to working too quickly:

“In a rush to get a complex and heavily researched story out about something altogether different – in this case, Samantha Power, the Dublin-born American ambassador nominee to the UN – I, in a last-minute addition, pasted in two erroneous words – ‘acknowledged homosexual’ – about the President of Ireland, Michael D Higgins, that pertained in fact not to him but his electoral rival for the job two years ago, David Norris.”

Monagan apparently didn’t do a final fact check of his article. “I hit the ‘post’ button without that last, last review critical to my lifelong trade,” according to Monagan. “And apparently, not one person at Forbes bothered a look as the post went global.”

While Monagan accepted responsibility for the “whopper,” he noted that under his agreement with Forbes, any errors had to be his own. “My contract warned that mistakes were my problem alone legally, and when the journalistic equivalent of a firestorm hit, Forbes could not even find my phone number,” he commented.

Monagan elaborated on his concerns with the state of online journalism and the lack of editing, specifically in his work for Forbes.  “Generally, there are no senior editors to ask any questions about what we report, no junior sub editors to screen the article before it goes live, and certainly no fact checkers – at least not until the damage is already done,” Monagan said of writing for Forbes.

Detailing his writing agreement with Forbes, Monagan said he had to write “four original articles about Ireland each month for a base fee of $200” and occasional small increases for articles with lots of hits or any “repeat viewer.”

But, when it all evened out, Monagan said he didn’t make very much money at all based on the average of ten hours spent per article.

In his email to iMediaEthics, Monagan also included a link to a Guardian interview with Forbes‘ Lewis DVorkin about how Forbes works with its contributor content. In that April 2013 article, the Guardian reported that Forbes has “1,000 contributors” who “self-publish” and “are paid according to the size of the audience they attract.”

iMediaEthics has reached out to Forbes seeking comment about Monagan’s commentary for The Independent and will update with any response.