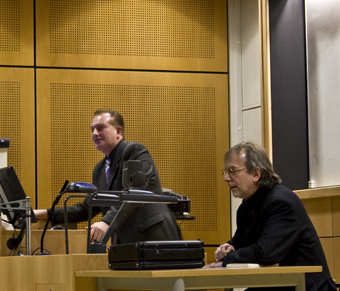 While addressing a student audience at the University of Lincoln (UK), former BBC Radio 4 presenter Dr. Michael Ford made strong statements regarding ethics in today’s media.

“I think these days journalism has tended to lack a strong underlying ethical framework,” he said, a great concern considering, “every story has potential ethical implications”.

In an email to iMediaEthics, he expanded on this statement:

“Journalistic Ethics has not grown out of a school of moral philosophy but from the common sense and experience of editors and reporters working in the field. To be taken more seriously, I think it should have a stronger philosophical basis. For example, the German philosopher Immanuel Kant said that ‘man’ isn’t free unless he sets up ethical imperatives for himself, so this gives some philosophical backing to the idea that journalists should develop their own moral codes based on their understanding of right and wrong.”

Ford, a visiting fellow at the Lincoln School of Journalism, discussed times when the BBC practiced questionable ethics. In an article for The Linc, editor Rob Wells wrote that, “The examples [Ford] gave centered largely around re-recording parts of radio pieces, the editing of recordings, and adding extra sound effects to increase the effect of radio journalism or mute film. He said that BBC studios in London had often filled in for places like Afghanistan and Iceland, without the listeners being aware that what they were hearing was not the authentic audio that had been recorded on location.”

Our Stink-Alert went off in full force, prompting us to contact Ford for clarification. In response, he said,

“It’s a good piece in The Linc but the part about London studios/Afghanistan etc isn’t quite correct. Sometimes reporters need to re-record location links in studios using the [atmosphere] recorded on location. This happens when there’s been a technical problem or if the story has moved on since it was recorded. I was posing the question … do students think it wrong that sometimes location pieces have to be re-recorded. Some presenters won’t do anything again in the studio that was already recorded on location. But I did point out that roads around the BBC  … indeed sometimes the BBC car park ….. are used to re-record material. You can’t go back to a country to record a link. So it wasn’t really about ethical breaches as common practices, and the students raised the question as to whether the audience really minded.”

Who is to say if the audience really minded? Is it ethical to add sound effects to journalistic reports, whether representative of original atmosphere? And how will the audience determine if they mind, if they are not alerted?

Ford says in discussing the issues with the students,

“I cited some examples from the BBC’s safeguarding trust course about whether or not to add sound effects if the ones you recorded on location aren’t satisfactory, practices which have come under the spotlight since Hutton. It’s okay, for example, to add [effects] of steam trains to mute film of steam trains, so long as you make sure it’s the right steam engine. But it’s not okay to add [effects] of a storm to a piece of film about an air sea rescue because it would be hard to know the original storm levels etc. It relates to BBC’s policy of fair dealing.”

As this was a conversation on ethics, Ford did not offer all the answers. His goal was to get the students thinking about ethics.

He also discussed interviewing tactics, implying that today’s journalists allow their personal opinions to play into the interview. In the email, Ford expanded on his comments,

“While a journalist has to be strong and persuasive in getting people to share their stories, there’s no need to be aggressive. In my experience, courtesy and good manners go a long way in gaining the trust of interview subjects, even if you have strong objections to their own viewpoints (none of us is personally objective the whole time because we are all culturally conditioned but we are ethically responsible when we are being professionally objective). Respecting the dignity of every human being should be a prerequisite in every interview situation.”

The Linc adjusted the original story, clarifying the nature of Ford’s examples, at Ford’s request. Stinky Journalism then asked Wells to post a disclosure of these corrections on the new article, in an attempt to create transparency. He has now done so, and said the failure to include one in the first correction was a mistake. It is The Linc’s policy to always include a correction disclosure.