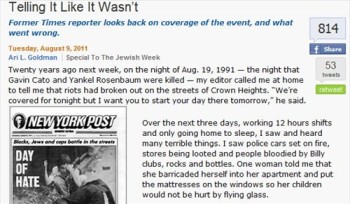 The reporter, Ari L. Goldman, noted he had been a Times’ religion reporter during the riots.  According to Goldman, while he provided the newspaper with reporting about the riots, the stories produced from his “memos” added in what he says is a fictionalized “version of events: blacks and Jews clashing amid racial tensions.”  He wrote:

“The city’s newspapers, so dedicated to telling both sides of the story in the name of objectivity and balance, often missed what was really going on. Journalists initially framed the story as a ‘racial’ conflict and failed to see the anti-Semitism inherent in the riots.”

The Jerusalem Post noted that the Atlantic’s Jeffrey Goldberg commended Goldman’s article. “It is astonishing, the lengths the Times went to prove that a riot that was anti- Semitic on its face wasn’t, in fact, anti-Semitic.”