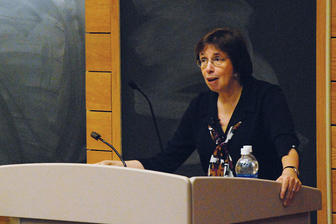 Linda Greenhouse, a Pulitzer Prize-winning journalist, lectures at Cornell University on the facts vs. the truth. (Credit: Cornell Daily Sun)

Greenhouse argues that facts and truth do not always go hand in hand, and challenges future journalists to seek out truth first, and avoid false balance in the name of an outdated notion of “objectivity”.

Keusch reports that Greenhouse asked the packed auditorium “Why is it just so difficult to make the search for truth the highest journalistic value?”  Challenging the founding goals of her former paper, “Greenhouse questioned the… aim to present all sides of the issue and then let the public decide.”

“Can this operate in the world when many stories have many sides or only one?” she said.

Examples abound of public issues where the traditional journalistic practice of giving equal weight to all sides has produced a false balance, or misleading coverage.  Greenhouse mentions one in her lecture—the term “waterboarding.”

“While many believe this to be torture, according to Greenhouse, some do not,” Keusch writes. “Thus, media outlets often use the phrase ‘enhanced interrogation techniques.’ This phrasing stems from the mass media’s ‘hypersensitivity to bias.’”

Greenhouse’s takeaway message is that facts do not always equal truth. While using the term ‘enhanced interrogation techniques’ is factual. It may not be truthful, if the majority of opinions view the practice as “torture.”

“Facts alone don’t necessarily lead the reader to real understanding, and that’s, I think, the function of journalism in democratic society — to empower readers and viewers.”

Another subject where this “he said, she said” style of reporting has been a problem is global warming, with reports that create a false balance by giving equal time and weight (if not more time and weight) to climate skeptics who’s views have been repeatedly answered or discredited.

According to Greenhouse, “the problem with presenting opposing views and treating every point equally is that some points may not be well-founded,” Keusch writes.

Keusch writes that one Ithaca College student, Melanie Ziegler, disagreed with Greenhouse at the lecture, saying:

“I personally think that definitely when it comes to journalism and newspapers, journalists should try to present things from more of a factual point of view instead of just giving their opinion and trying to push that,” Ziegler said. “There are plenty of sources where people can go to listen to people’s opinions.”

Greenhouse counters that she isn’t talking about fact vs. opinion here, but rather fact vs. truth, arguing that focusing on an outdated notion of presenting objective equity among dissenting sides, actually creates journalism that can fail to report the truth of a story.

“If all you do is ‘he said this’ and ‘she said that’, those are both facts,” Greenhouse said, “but you can end up completely not informing or misleading the reader unless you, the journalist, are using whatever intelligence you might have to determine where they’re coming from. You’re paid to use your critical intelligence, to do that heavy lifting.”

Greenhouse seems to be calling here for a focus on the role of the journalist as a critical thinker, not just an investigator.  It is our job, she argues, not to present all sides blindly, but to assess the truth of opposing claims and make reporting decisions accordingly.

She is not asking reporters to ignore the facts, rather she is encouraging journalists to vet those facts–to seek truth first and recognize when facts do not combine to produce a truthful account.

Read Neuharth-Keusch’s report on the lecture in full here.