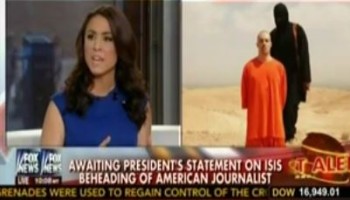 A still image of Tantaros during the Aug 20 segment in question.

“Muslims and Islam are not interchangeable terms with terrorists or ISIS. We in the media know better and must be vigilant in our choice of words,” AAJA said in an Aug. 27 statement from its MediaWatch committee and national president Paul Cheung.

On Aug. 20, prior to President Obama’s comments about the beheading of Foley by ISIS, Tantaros said:

“They’ve been doing this for hundreds and hundreds of years if you study the history of Islam.”

She further called for a “bullet to the head” of those responsible.

Prior to Tantaros’ comment, another host pointed out that there is a “big difference” between “moderate Muslims” and “this jihadist terrorist group.”

AAJA questioned Tantaros’ remarks, saying in a statement: “What we at the Asian American Journalists Association don’t understand is how the barbaric act of a terrorist group could be used to condemn and to smear an entire faith.”

“AAJA calls for Tantaros and Fox News to apologize for the irresponsible, inflammatory statements. We also call on Fox News to discourage its journalists from making blanket comments that serve to perpetuate hate and Islamophobia.”

AAJA noted that it reached out to Fox News “multiple” times about the segment but hasn’t had any success. iMediaEthics has contacted Fox News for comment as well.

“AAJA has no other comment beyond our statement right now. I do want to point out that the mission of AAJA MediaWatch is to hold news media organizations accountable to standards of accuracy and fairness in the coverage of Asian Americans and Pacific Islanders and AAPI issues. We are a non-partisan organization.”