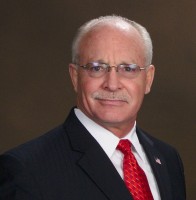 A regular Fox News guest commentator, Wayne Simmons, lied about working for 27 years in the CIA, the U.S. Government says.

Simmons, who Fox News says wasn’t paid or affiliated with the network, was indicted for “charges of major fraud against the United States, wire fraud, and making false statements to the government.” The FBI issued a press release today about the indictment.

Simmons “falsely claimed” he was an “Outside Paramilitary Special Operations Officer” for the CIA between 1973 and 2000, the press release says the indictment charges. “On Fox, this was often shortened to ‘former CIA operative,'” CNN reported.

As a fake former CIA employee, Simmons is accused of trying to get government security clearances and explaining away previous “arrests and criminal convictions” as from his CIA days, the press release says.

In addition, Simmons is accused of fraud related to a $125,000 “bogus real estate investment,” the press release says.

Simmons was on Fox News “dozens” of times, according to CNN, during which he “regularly made extreme and factually dubious statements pertaining to terrorism and national security.” He first was a guest commentator on Fox News in 2002, according to the Guardian.

After the news of Simmons’ indictment, Fox News’ Bret Baier said on air that Simmons was not paid but just a guest. Media Matters posted video of Baier’s comments. “Simmons made appearances on Fox as a national security and terrorism expert,” Baier said. “However, he was never employed by the channel and was never paid by Fox.”

CNN noted the charges of fakery against him “is a red flag for every television network that relies on the input of analysts based on their supposed credentials.”

The Associated Press reported that “no lawyer has yet entered an appearance” for Simmons.