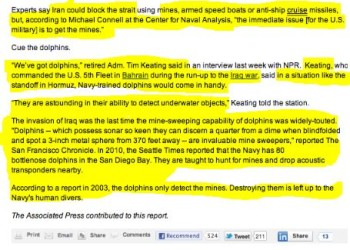 See above a screenshot from the second half of the Fox News article -- before it was updated and re-written. Highlighted is text verbatim from the Atlantic Wire. Screenshot from The Atlantic's John Hudson, highlight added.

Fox News lifted an article from the Atlantic Wire, was called out for it, and updated the post with an editor’s note to un-do the plagiarism.

As POLITICO explained in a Jan. 16 story, the Atlantic Wire’s John Hudson spotted the Fox News post, a story that largely lifts from and in some sentences rewrites his Jan. 13 article, “The Navy Is Depending on Dolphins to Keep the Strait of Hormuz Open.” (See above screenshot, which highlights text lifted from the Atlantic Wire.)

POLITICO noted that Fox News does source some information to the Associated Press — and the San Francisco Chronicle, like Hudson — but there is “no mention of Hudson or the Atlantic.”  Hudson told iMediaEthics by e-mail that his editor, Gabriel Snyder, contacted Fox News about the issue “before they issued their apology but never ended up receiving a direct response.”

Hudson also told POLITICO about the copy lifting and POLITICO tried contacting Fox News without success. But, despite the lack of response from Fox News, the article was updated and rewritten and now carries this editor’s note apologizing for the incident:

At the bottom of the now rewritten article, which is now only three paragraphs long, Fox News includes a prominent note and link to the Atlantic Wire reading:  “Click here to read the full theatlanticwire.com article on the use of dolphins by the Navy.”

iMediaEthics asked Hudson via e-mail if he was satisfied with Fox News’ response to the incident. He said that:

“In terms of being satisfied with Fox’s response, I suppose they did as much as I would expect them to–though I’m still curious why they cited the Associated Press in their article when neither the Fox News story nor my story gleaned reporting from the AP. Did the news agency provide moral support?”

Mediaite noted that the Fox News article carried no byline.  In his e-mail to iMediaEthics, Hudson also touched on the byline issue, referencing this article and writing:

“The damaging aspect for Fox is that these kinds of sloppy, un-bylined articles appear next to other un-bylined articles that actually involve some impressive reporting. Take an unbylined piece like this, which cites Bret Baier at the bottom. I doubt Baier, who by all accounts is respected anchor, would like his work appearing in the same ecosystem.”

Fox News’s “senior news management is reviewing” the incident, according to Mediaite. We have written to Fox News asking for more information about this incident, including why there was no byline on the story, and will update with any response. 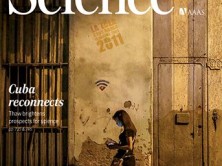