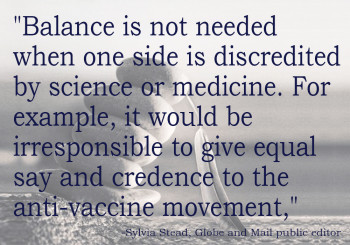 A Canadian toddler named Ezekiel Stephan died from meningitis in 2012 and his parents, David and Collet Stephan, who treated him with naturopathy, were found guilty in his death. The Stephans said they thought their 19-month-old had croup or the flu, but a nurse friend had told them she thought it was meningitis. The child wasn’t taken to the hospital until he stopped breathing, the CBC reported.

Naturopathy is defined by the University of Maryland Medical Center as:

A couple of readers were angry with the Globe and Mail because it didn’t give balance to naturopathy, instead publishing a news story about problems with naturopaths in the area and two opinion pieces critical of naturopathy.

The Globe was right to not give false balance by featuring the perspective of naturopathy, Globe and Mail public editor Sylvia Stead reported.

“Balance is not needed when one side is discredited by science or medicine. For example, it would be irresponsible to give equal say and credence to the anti-vaccine movement,” Stead explained. “In my view, the same is true for naturopathy.”

It is important that the Globe acknowledge that naturopathy isn’t on the same playing field, Stead said, for the safety of the public. She wrote:

“Reporters and columnists are delving into the very real public-health issues of relying on supplements to the exclusion of medicine. They are not and should not see naturopathy and medicine treated as equal partners in health care. And there is absolutely no reason for them to give equal time to the other side. To do so would be a false balance and could endanger public health.”