France 2 Faking It Again: Are Empty Grocery shelves in Gaza for Real? 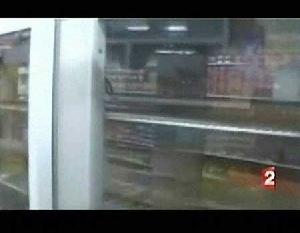 A France 2 report interviewed a Gaza resident who said there was no food in stores and people were starving. However, the France 2's own footage in its report revealed contrary evidence. Look closely in the screen still image above. The reflection in the refrigerator case shows food was, in fact, well stocked on shelves in other parts of the store.

France 2 is again accused of fakery in their coverage of the conflict in the Gaza Strip. In this latest incident, in a report about people starving in Gaza, a reporter interviews a Gaza resident who says, “Apparently, there is nothing, as you can see. There are no natural products for the kids. There is no milk. There is nothing here.” The shelves behind them in the shot are completely bare. But the camera crew miscalculated one element of the shot: the reflection in the refrigerator doors. If you look closely, you can see that the reflection shows shelves in other parts of the store stocked with food.

Jennifer Laszlo Mizrahi, president and founder of The Israel Project in Washington, who discovered this new instance of fakery, told FOX News, “France 2 has taken a line that is very anti-Israel and they are using what some call ‘Pal-lywood’ — the Palestinian use of Hollywood techniques to create what didn’t happen.” She said there are two wars being wages in Gaza. “Both are life and death, but one involves military personnel and operatives and the other is a media war waged to win hearts and minds…The media needs to be careful because a correction on page A-14 versus a front page spread doesn’t do justice to the damage already done in public opinion.”

France 2 hasn’t commented on this latest incident. This is the third time France 2 has been caught airing questionable footage from the Gaza Strip. In the first incident, France 2 denied any wrong-doing, and the case is still in the French courts. Last week, France 2 issued an apology for using footage from 2005 and claiming it is from January 2009. Check last week’s StinkyJournalism.org post for the details.

(Another question that arises: What is the correct spelling of the name of the Palestinian boy killed in 2000, the subject of the first set of controversial France 2 footage? I have seen it spelled al-Dura, al-Durra, and now, by FOX News, al-Durrah. It seems none of the major media outlets can agree on the fact of a correct spelling.)

France 2 Faking It Again: Are Empty Grocery shelves in Gaza for Real?