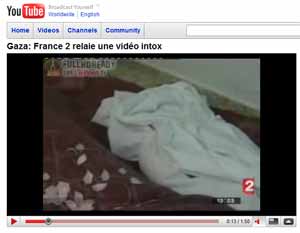 France 2 tried to get away with using 2005 b-roll footage as evidence of 2008 Israeli violence in Gaza. They got caught! This screenshot is from YouTube.

A France 2 report showed old footage – from 2005, of the dead bodies of children killed by the accidental explosion of a truck carrying Hamas rockets- and tried to pass it off in January 2008 as recent footage illustrating the violence of the Israelis in Gaza, according to French blog, Le Post.

Etienne Leonhardt, France 2’s joint director responsible for investigative reports, immediately fell on the sword and said the network would apologize. He said, “The person who prepared the topic went too fast. It reminds us that we must be very attentive on verifying sources.”

This is the second time France 2 television network has been under-fire for a report on Israeli army operations.

Last year, the Wall Street Journal reported on a French court ruling that calls into question the truthfulness of a 2000 France 2 story that the Israeli army shot and killed a 12-year-old Palestinian boy, Mohammed al-Durra. The story was called a “hoax” by a media watchdog, Philippe Karsenty. Unlike this new case, the al-Durra debacle has been in the courts for years, still without an apology.