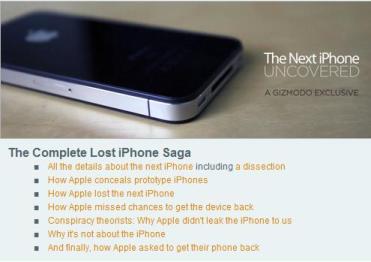 Gizmodo has run several stories on the iPhone controversy, shown here in this screenshot from Gizmodo's Web site.

iPhones can do so many things that it is not surprising that the device plays a role in media ethics issues too–even without an app.

The Back Story: Apple employee Gary Powell left a prototype for the newest iPhone in a bar on March 18.  The person who found the phone tried to return it to Apple, Apple didn’t bite, so the finder (still unidentified) put the phone up for bid.

Gizmodo, owned by Gawker, shelled out $5,000 for the phone, dissected it and wrote reports on its Web site about it.  Gizmodo wrote that the phone was “bricked” (a useless, inoperable iPhone) and that they assumed Apple “wiped remotely” the phone probably the night it was lost.

Gizmodo editor Joseph Chen’s house was raided last week by California police.  The police broke down Chen’s door and seized four computers, two servers and more from his home, Tech Crunch and PC World reported.  The Los Angeles Times reported that the search warrant was “because the property may have been ‘used as a means of committing a felony’ or could ‘show that a felony has been committed.'”

Does paying for the device count as checkbook journalism?

As Channel Web wrote April 29 “It’s unclear whether a crime has actually been committed. The question remains: If the property was found (not stolen), can the finder sell it, or sell access to it?”

CNET reported that under California law, “any person who finds lost property and knows who the owner is likely to be but ‘appropriates such property to his own use’ is guilty of theft. If the value of the property exceeds $400, more serious charges of grand theft can be filed. In addition, a second state law says that any person who knowingly receives property that has been obtained illegally can be imprisoned for up to one year.”

But, both the original finder of the iPhone and Gizmodo contacted Apple and Apple didn’t claim the phone.

“Apple has indicated it believes a serious felony was committed,” Slate wrote. “The company appears to regard Gizmodo’s acts as larceny, or misappropriation of trade secrets, or both. Here is where the case gets serious: If we accept that journalists can be punished severely for publishing information gained by others in unsavory ways, that’s a bad thing for journalism. Nearly every truly big story, from the Abu Ghraib photos on down, involves a leaker of some kind, often one who has broken some law.* If the publishers of such materials—as opposed to the leakers—are treated as criminals, journalism will suffer.”

Did Gizmodo and the iPhone finder do all they could have and should have to return the phone?

DigiHub blogged April 29 “Gizmodo wrote about the phone and then handed it back to Apple, but only after insisting Apple formally request it and thus prove that it really was a prototype iPhone.”

As Reuters reported, some speculated Apple wouldn’t take any action, “since any act on their part would validate the story.”

Gizmodo’s Joseph Chen is a blogger.  Will he be considered a journalist and, as such, will he be covered by reporters’ privileges?

Digihub wrote the Gawker says the raid was illegal since Chen should be protected under journalist shield laws. “The case is going to turn into a major test of whether bloggers are considered ‘journalists’ in the eyes of the law,” Digihub wrote.

Just this week, a New Jersey appellate court upheld a lower court ruling that blogger Shellee Hale is not a journalist.

The Electronic Frontier Foundation wrote the warrant most likely violates the California Penal Code Section for reporters shield and the Privacy Protection act.

“Sending ‘enforcers’ to private citizens’ homes or being complicit in entryway destruction is generating only a very large current of mistrust for the company,” Channel Web wrote.

CNET reported April 28 that Gizmodo could sue the sheriff’s office because “search is not the appropriate method in this situation,” CNET reported lawyer Burke said. Burke told CNET that the search warrant went against shield laws in California.

YahooNews reported April 27 that Apple is on the steering committee for the agency behind the raid at Chen’s house was REACT.  The Santa Clara-based task force was founded in 1997 “commissioned to work with the computer industry to tackle high-tech crimes.”

If Apple had the opportunity to claim its product and did nothing about it, why did they wait until after the reports were published to take action?  More importantly, why did the police get involved?

“There is something unsavory about sending the police after journalists whose so-called crimes are borderline at most,” Slate wrote.  “At a moment of increasing private power, journalism is more important as a check not only on the public sphere but the private one. As it stands, the press in all its forms hardly does that job well. It does not need another shackle.”

Of course, the iPhone isn’t some great government secret – it is just a product. The ability for news organizations to write about it in advance isn’t of any great importance, just interest.

“The door bashing comes across as gratuitous use of force,” Channel Web wrote. “Remember, this is an investigation about a mobile phone.”

Couldn’t there have been any other way for Apple – or REACT – to handle this?

Slate wrote “the site published truthful information about a matter of public interest. Apple wants to enlist the government to punish the supposed miscreant.”

Time magazine’s Curious Capitalist blogged that in 2004 Apple tried to get news sites to give up sources on a new Apple device.  The information had been leaked by an Apple employee.  The appeals court ruled against Apple because they said Apple hadn’t investigated on its own enough.

“But, as the court noted, ‘an interested public is not the same as the public interest.’ Just because a journalist winds up with a trade secret that a lot of people want to know about doesn’t mean it’s okay for him to write about it,” Time blogged.

As iMediaEthics reported, earlier this year Gawker was in the crosshairs when it offered a reward to anyone who could provide access to the then-unrevealed Apple Tablet (iPad).