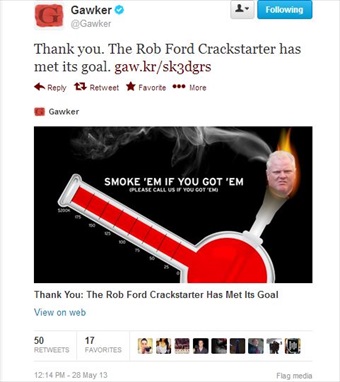 According to Cook, Gawker is still waiting to find out “precisely when we get the money, in what format, etc.” and the “total amount that has been released to us” after paying fees to Indiegogo and Paypal.  As iMediaEthics wrote yesterday, Indiegogo’s website says it charges a 4% fee on successful campaigns (campaigns that reach their fundraising goals, which Gawker’s did). That means that Gawker will have to pony up about $8,000 in fees to Indiegogo alone.

iMediaEthics wrote to Cook yesterday asking if Gawker decided to donate the money instead of refunding it in order to avoid having to pay the fees but we  have not had any response yet.

In his post for Gawker, Cook said he’s still trying to track down the people who have the video, describing Gawker’s attempt to buy the video “a very delicate transaction.”  He made a plea for the video owners to “get in touch with our mutual friend” or to contact him directly and indicated Gawker plans to go radio silent in its attempts to get the video.  Readers “won’t hear anything more from us about our attempts to get the video for some time,” Cook wrote.

Cook repeated Gawker’s intention to donate “100% of the proceeds to a Canadian nonprofit that addresses the consequences of substance abuse,” if Gawker can’t seal the deal with the video sellers, described by the Toronto Star as “a group of Somali men involved in the drug trade”

But, The Globe and Mail reported that not all substance abuse groups want the cash from Gawker’s “Crackstarter.”

According to The Globe and Mail, Toronto’s Oasis Addiction Recovery Society’s executive director Shirley Carmody said the organization didn’t “want any part of it” and wants donations “from a good source, not something like this.”

Two other Canadian organizations, Centre for Addiction and Mental Health and Bellwood Health Services, told The Globe and Mail they’d have to think about accepting the money. However, the Salvation Army in Canada’s Andrew Burditt said it would take money “obtained legally.”

Meanwhile, Globe and Mail public editor Sylvia Stead defended the use of anonymous sources in the newspaper’s May 25 article, “Globe investigation: The Ford family’s history with drug dealing.”

The article reported that Ford’s brother Doug Ford, a member of Toronto City Council, “sold hashish for several years in the 1980s,” that “another brother, Randy, was also involved in the drug trade,” and that “their sister, Kathy, has been the victim of drug-related gun violence.”  The article was based on interviews with more than ten anonymous sources.  In response to the report, Doug Ford’s lawyer Gavin Tighe called the report an example of “the height of irresponsible and unprofessional journalism given the gravely serious and specious allegations of substantial criminal conduct.”

In addition to Stead’s assessment of the reporting, the newspaper’s editor, John Stackhouse, published an “editor’s letter” explaining “why we published the Ford family story.”

Stackhouse said the newspaper’s story was published “with utmost caution, journalistic rigour and legal scrutiny” and for the public interest. According to Stackhouse’s letter, Globe and Mail have been looking into the claims during “an 18-month investigation,” and tried “several times” to discuss the story and its reporting with both Rob Ford and Doug Ford.