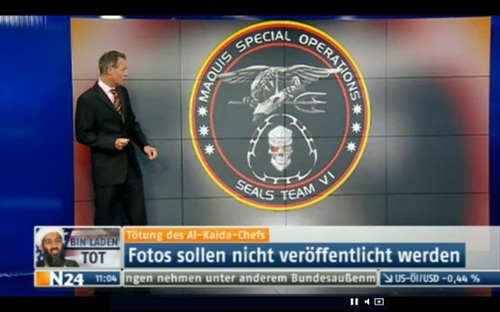 German TV news station N24 confused the logo for Navy SEAL Team Six with that of a “fan-made logo for the Maquis,” a Star Trek group,  Gawker-owned blog io9 reported.

Star Trek fan news site TrekMovie.com noted that the news anchor, Mick Locher, “didn’t seem to notice (or care) that the skull in question [on the logo] was from a Klingon and included a bolted-on eyepatch.”  TrekMovie.com suggested the mistake was the result of a “sloppy Google image search” and added that “TrekMovie can confirm that Star Trek’s Maquis were not involved with the mission to take down Osama bin Laden.”