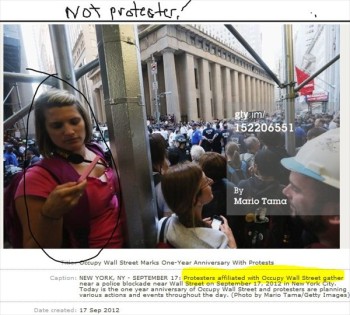 Stony Brook University Journalism student Philly Bubaris is misidentified as being a one of the "Protesters affiliated with Occupy Wall Street" in a photo by Mario Tama from Getty. She was never interviewed or approached for an ID, but that assumption was made by the photographer. (Credit: Getty Images, screenshot, highlight added)

Journalism schools are increasingly pushing the “Teaching Hospital” model of learning — learn by doing, not in a classroom.

So with that in mind, I took 15 students from my multimedia journalism class at Stony Brook University’s School of Journalism to Occupy Wall Street’s one-year anniversary actions on Sept. 17 – a congregation around Manhattan’s Zuccotti Park and marches around the New York Stock Exchange.

Which is why I was shocked to see this image (also found above) and caption pop up on a few news sites.

It’s troubling to see, in Getty Images’ coverage, one of my students – a prominent, easily identifiable subject – labeled as an Occupy Wall Street protester. She’s nothing of the sort, she reminds me. She was there photographing and live-tweeting the event for class. Journalists have lost their jobs because of their involvement with Occupy Wall Street. So it might not be seen as a good career move for a student journalist to be identified with the protest.

Philly Bubaris, my student in the photo, was not too happy to be labeled as a protester.  “I didn’t particularly like that my photo was taken at this protest at all, yet it was bound to happen with all of the media there,” Bubaris wrote in an email to me.

“But, to be labeled as a protester when I was there as media is a bit scary. I am an aspiring journalist, and one day, somehow, that picture of me could be found by a future employer and I could lose my chance at a job.”

iMediaEthics emailed Mario Tama, the staff photojournalist at Getty who shot the photo, on Sept. 20 about the error and asked for a correction — but Tama gave the excuse that you might expect: it’s a large crowd.

“It is usually impossible for me to do my job as a photographer and simultaneously interview and identify each individual in my frame when there are a large number of people in my image,” Tama wrote.

Except that in this frame, my student (Bubaris) is clearly the subject in the frame. Tama denied this, writing:

“The person in the lower left corner of the frame in pink isn’t the subject of my image, the point of this image was to try and show a large group of protesters who were gathered on all four street corners around a police blockade near Wall Street and that is what is reflected in my caption.”

Tama has come under the iMediaEthics microscope before – in a previous article, I criticized one of Tama’s photos for not using the name of a prominent Occupy Wall Street protester, Lauren DiGioia, when she is clearly the subject of the photo.

But, even if looking the other way on the point of identification, iMediaEthics e-mailed Tama again on Sept. 21, asking now that he knows who the woman in pink is, as a result of our e-mail, would he append any correction or clarification to the caption?

Getty Images Director of Photography Pancho Bernasconi was copied on the e-mail, as Tama added him to his initial reply. Two days later, on Sept. 23, Bernasconi and Tama wrote to me, asking for my student’s contact information, which she agreed to share with them.

Tama contacted Bubaris later that day, specifically pressing her on her use of a press pass, writing:

She wasn’t wearing a press pass. But that doesn’t mean the caption was correct, a fact Bubaris reminded Tama in an email response the next day, writing: “I have never had any affiliation with OWS and through this caption, you cast me in a false light by stating that I, and everyone else in your image, was “affiliated.” Your caption stated: ‘Protesters, affiliated with OWS…’ when you didn’t really know who I was or why I was there because you never asked me.”

iMediaEthics and I helped Bubaris through this process on working with Getty to correct the caption that could negatively affect her career.

Tama agreed to change the original caption (“Protesters affiliated with Occupy Wall Street gather near a police blockade near Wall Street on September 17, 2012 in New York City. Today is the one year anniversary of Occupy Wall Street and protestors are planning various actions and events throughout the day.”) to:

“Crowds gather amid Occupy Wall Street protesters as New York Police Department officers (C, background) man a barricade near Wall Street on September 17, 2012, in New York City. Today is the first anniversary of Occupy Wall Street and protesters are planning various actions and events throughout the day. Student photojournalist Philly Bubaris (L) looks on as she stands on a pole.”

That’s progress – to label it a crowd and not all protesters – but it’s clear this was handled only for my student. What about the other people in this photo? All of Tama’s other photos from that day (here’s an example) still label people in the photos as “Protesters affiliated with Occupy Wall Street.” Tama had no way of knowing if this were true, making the captions of this and all his other shots that day inaccurate.

Then there’s the stealthy nature of the correction. The caption was changed in Getty’s database, but there’s indication that the caption was ever wrong in the first place — there’s no transparency.

The problem is that by scrubbing the caption this way, Getty is enabling the error to happen again (and in effect, harming her again) as their other media customers undoubtedly have this bad caption in their database since no correction went out over the wire.

If there isn’t a correction moved across the wire, then how are editors who ran the photo supposed to know what to change? For example, the photo in question was still posted on the San Jose Mercury News website with the inaccurate caption a month after the protests.

Here is the same image in a Mercury News photo gallery. It’s my student and she’s a protester again in the Mercury News‘ caption.

The Mercury News published Getty’s image in a photo gallery with the same inaccurate caption about my student. After iMediaEthics contacted the Mercury News, it acted just like Getty, and scrubbed its caption without a correction notice. (Credit: Mercury News, screenshot)

I contacted Michael Malone, the Director of Photography at the Mercury News, for more information on Oct. 17. While he couldn’t confirm if Getty issued any correction notice about the photo, the e-mail I sent prompted the Mercury News to scrub the caption – they added information, like Bubaris’s name, with no disclosure of the update or correction, just as Getty did. iMediaEthics e-mailed Michael Malone on Oct. 22 to ask about their failure to provide a transparent correction but he didn’t respond to my questions.

Malone, in his initial e-mail, said that wire services generally were fast with corrections, writing:

“I can tell you from past experience that Getty, Associated Press and Agence France Presse do send correction notices out when a correction is needed. In my opinion they seem to do so fairly promptly.”

Maybe Getty is just quick with scrubbing errors, but certainly not, in this case, sending out a correction over their wire. For what it’s worth, the student in question, while offended, was taking the issue in stride. Bubaris even wondered why she needed to be in the photo in the first place, saying in an email to me:

“The photo doesn’t really need me to be in it and being that the person who took the photo didn’t know my name, I easily could have been cropped out. If anything, I think my presence in the photo weakens the image more than it strengthens the image. Overall, poor judgment on the photographer’s part, but unfortunately I am sure that it happens all the time.”

It does, and that’s a bad thing.

Editor’s Note: Bubaris provided iMediaEthics with her email exchanges with Getty about their error.

Not Discriminatory to write about Woman's relationship with a chandelier, IPSO rules
2 Serbian news outlets criticized for rape reporting