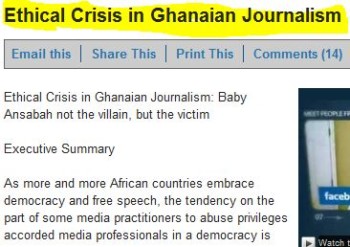 Ghana Web featured a case study on the ethics of reporting. Baby Ansabah (the “nom de plume” of journalist Ato Sam) and the reporting on the health of John Evans Atta Mills, who was elected president of Ghana in 2008 are discussed.

Ghana Web ultimately used the case of Sam/Baby Ansabah as a way to prompt discussion on how much of a candidate’s life is in the public interest.  “Should all health questions be opened to public scrutiny, or just those that may have an impact on the candidate’s ability to the job,” Ghana Web questioned.

According to a February 2010 Modern Ghana article, the Ghana Journalists Association (GJA) “referred the conduct of Mr Ato Sam to the Ethics and Disciplinary Council” after Sam was exposed for fabricating stories to influence the election.

The GJA condemned Sam’s behavior and called it “selfish, unprofessional, and no-conscience, pervasive journalism.”  However,Ghana Web’s case study concluded that Sam wasn’t “the villain, but a victim of political corruption in the media.”