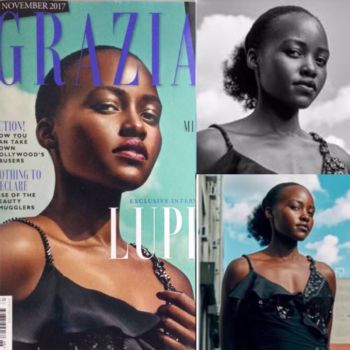 Did UK magazine Grazia Photoshop actress Lupita Nyong’o’s hair to make its cover shot of her look “more Eurocentric”? They claim they didn’t do it, though the original photograph was indeed altered by someone, presumably the photographer, before it appeared in print.

Nyong’o accused the magazine of making the alterations in a tweet. As evidence, she showed side-by-side photographs from the cover shoot, along with the magazine’s final cover image. The final image shows her hair closely cropped, whereas the other photos clearly show her hair flowing behind her head in a ponytail.

“Disappointed that @GraziaUK edited out & smoothed my hair to fit a more Eurocentric notion of what beautiful hair looks like,” Nyong’o tweeted. She added the hashtag #dtmh, for don’t touch my hair — the same hashtag singer Solange Knowles used a few weeks ago when the London Evening Standard edited a cover photo of her to remove her braid. On Instagram, Nyong’o added,

“As I have made clear so often in the past with every fiber of my being, I embrace my natural heritage and despite having grown up thinking light skin and straight, silky hair were the standards of beauty, I now know that my dark skin and kinky, coily hair are beautiful too. Being featured on the cover of a magazine fulfills me as it is an opportunity to show other dark, kinky-haired people, and particularly our children, that they are beautiful just the way they are. I am disappointed that @graziauk invited me to be on their cover and then edited out and smoothed my hair to fit their notion of what beautiful hair looks like. Had I been consulted, I would have explained that I cannot support or condone the omission of what is my native heritage with the intention that they appreciate that there is still a very long way to go to combat the unconscious prejudice against black women’s complexion, hair style and texture. #dtmh“

In response, Grazia UK issued a statement on Twitter in which the magazine apologized “unreservedly” to Nyong’o but denied requesting Nyong’o’s photos be altered. They also denied altering the image themselves, implying that the decision was made by the photographer.  [The full statement is below]

When asked about the alteration, a Grazia spokesperson pointed iMediaEthics to its tweeted statement and noted that the photographer was An Le.

Disappointed that @GraziaUK edited out & smoothed my hair to fit a more Eurocentric notion of what beautiful hair looks like. #dtmh pic.twitter.com/10UUScS7Xo