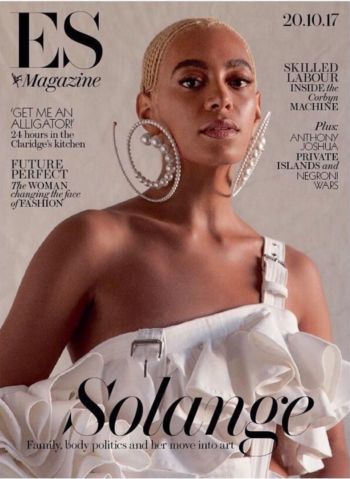 Fashion magazines Photoshop their subjects, but news outlets are not supposed to “editorialize” and change the appearance of photos. So why did the London Evening Standard commit such an ethical violation by Photoshopping its cover photo of singer Solange Knowles, removing her braid? It even led to the journalist who conducted the Knowles interview to disown the piece.

Knowles posted on Instagram what her hair looked like pre-Photoshop, with the caption “dtmh @eveningstandardmagazine.” (DTMH stands for don’t touch my hair.)

“We were delighted to have the chance to interview the wonderful Solange Knowles and photograph her for this week’s edition of ES magazine.

“It is therefore a matter of great regret that the finished cover artwork of the magazine caused concern and offence.

“The decision to amend the photograph was taken for layout purposes but plainly we made the wrong call and we have offered our unreserved apologies to Solange.

“In the article, which you can read here, Solange spoke about remaining as focused on art as she is on music, despite her brilliant third album being both a critical and commercial success.”

Angelica Bastien, the reporter who interviewed Knowles for the Evening Standard, tweeted she was “publicly disowning” the article and wanted Evening Standard editors to “take my name off of the byline,” the Guardian reported. We’ve e-mailed Bastien for more information, but she declined to comment on the record.

I am publicly disowning the Solange piece London Evening Standard published today. The entire piece was a fiasco despite my efforts.