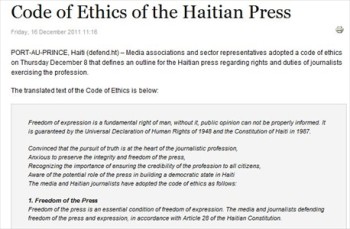 The code of ethics (see here) was adopted Dec. 8.

The code also advises journalists to be respectful of “human dignity and privacy,” to be respectful of those “suffering,” to avoid discrimination, and to be sensitive in publication of any violent or sensational material.  Journalists are advised to quickly correct any errors and give “the right of reply” to anyone who is ‘unjustly implicated” in a media story.

Journalists are also advised to protect anonymous sources and “refrain from plagiarism.”  The code also tells journalists to “Refuse any gift or gratuity that could compromise their impartiality” and tells media owners to “provide compensation for journalists to live a decent life.”

According to UNESCO’s website, “This is the first time a code of ethics has been adopted by the media in Haiti.”  UNESCO noted that it supported the effort and “facilitated a participatory process to develop the code of ethics.”

We have written to the National Association of Media in Haiti’s president Max Chauvet, the Association of Haitian Journalists’ Jacques Desrosiers and UNESCO. We will update with any response.

iMediaEthics has added the ethics code to our list of international ethics codes in our Resources for Educators section. See our list here.