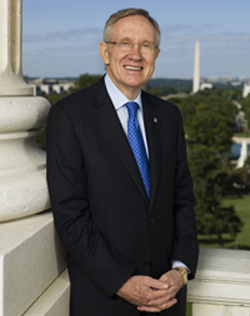 The confusion over an unfortunate exchange between Senate Majority Leader Harry Reid and Mark Halperin and John Heilemann–the authors of the recently released book Game Change, about the 2008 presidential election–highlights the tenuousness of ethical agreements between source and reporter.

The terms of a journalist’s relationship with a source should always be clear. Yet, even between two seasoned writers and an experienced politician, these agreements can lead to conflict.

Encouragement of Obama was unequivocal. He was wowed by Obama’s oratorical gifts and believed that the country was ready to embrace a black presidential candidate, especially one such as Obama — a “light-skinned” African American “with no Negro dialect, unless he wanted to have one,” as he said privately.  Reid was convinced, in fact, that Obama’s race would help him more than hurt him in a bid for the Democratic nomination.

Since then, Reid has apologized both publicly and privately to President Obama for his remark. But the question has lingered, how did this quote happen, and how did it get into the hands of Halperin and Heilemann.

Politico.com writes, “In the book’s ‘Authors’ Note,’ they wrote: ‘All of our interviews — from those with junior staffers to those with the candidates themselves — were conducted on a ‘deep background’ basis, which means we agreed not to identify the subjects as sources in any way. We believed this was essential to eliciting the level of candor on which a book of this sort depends.’”

In the passage above, Halperin and Heilemann put quotation marks around Reid’s statement. In journalism, this typically means that the statement was made to the journalists, or in their presence. It signifies a direct quote. Greg Sargent writes at the Plum Line, “Reid’s office confirms that Reid himself was the source of the anecdote to the reporters. His office declined to elaborate. But it looks as if Reid used the language to one of the reporters in some way or other.”

But how could the two writers quote Reid directly, when they describe their reporting method as on ‘deep background’?

Under most reporters’ definitions of “deep background,” the agreement means the information can be used, but it has to be unattributed and presented only as the reporters knowledge. DC Spectator writes “When a source speaks on ‘deep background’, the stipulation is that the reporter may assert the information at their own authority, with absolutely no attribution nor any quotes around any comments made by the source.”

Under this definition, Halperin and Heilemann could have written something like “Reid believed that the country was ready to embrace a black presidential candidate, especially a light-skinned African American with no Negro dialect, unless he wanted to have one, like Obama.” But instead, they put Reid’s comment within quotation marks. This means their agreement with sources must have been something other than strictly reporting on deep background.

According to Politico, Heilemann said on MSNBC’s “Morning Joe”: “We had a very clear agreement with all those sources that our interviews would be on deep background. … Our ground rules are … that we won’t identify any of our sources as the sources of the material. But we said to them all very clearly that if they put themselves in scenes of the book, if they were uttering dialogue to people in the book in part of a scene, that we would identify them as the utterer of those words.”

But it doesn’t seem clear how Reid put himself in the scene of the book, what that phrase means, or whether it was or could have been clear to sources that they were speaking under this modified deep background agreement. Especially since Halperin and Heilemann write that Reid said his remark in “private,” which implies he said it privately to them, and therefore not as part of the type of observed action they seem to describe as putting oneself in the scenes of the book.

Frankly, all of these terms, deep background, off the record, on background, etc., are confusing for sources as well as reporters, without complicating them with further clauses about putting oneself into a scene. The best thing to do is to make completely clear that you and your source agree on how you are going to treat the information they share with you and the things you witness as part of your reporting on them. It’s unclear how well Senator Reid may have understood his arrangement with Halperin and Heilemann, but if their own complicated description of the agreement is representative, it seems plausible the policy wasn’t made as crystal clear as perhaps it should have been.