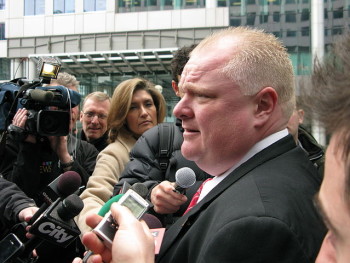 This week, new images taken from videos of an apparently intoxicated Toronto Mayor Rob Ford smoking from what is likely a crack pipe were revealed in the media. The latest revelation in what is reported as his periodic party-time debauchery while in public office has led to his taking a temporary leave of absence from the mayor’s office and suspending his campaign for re-election for treatment.

Globe and Mail public editor Sylvia Stead blogged May 1 about her newspaper’s $10,000 payment for images of Rob Ford and the issue of paying sources for information.

“To the best of my knowledge,” Stead told iMediaEthics by e-mail, this payment was the first time the Globe and Mail has paid a source. “Certainly in recent times although the paper has been around since before the country was formed so I can’t say never,” she wrote.

The Globe and Mail published a handful of photos of Ford holding a pipe. The newspaper editors said they bought the photos from a “self-professed drug dealer” and that they weren’t certain about what Ford was smoking in the video. Following the release of the photos, Ford said he was taking a leave of absence to get “immediate help,” as iMediaEthics reported yesterday.

Stead said in her blogpost that she thought it was the first time the newspaper had paid a source and that the newspaper’s Code of Conduct doesn’t specifically address making payments.  She explained:

“It is worth noting that The Globe and Mail’s Code of Conduct does not mention paying for sources or photos. Paying for freelance photos is common practice, although it does not explain these Rob Ford photos, which fall more in the line of paying for information than paying for a photograph.”

Noting recent cases of checkbook journalism, including ABC News’ payment to Jaycee Dugard for videos, Stead argued the Ford photos were in the public interest, which she said should be where the “bar” is set in order to swap cash for information or material.

“There is, without a doubt, a higher duty to inform the public about its elected officials,” she wrote.

She also pointed out the public’s skepticism in the Toronto Star and Gawker’s reports last year claiming they saw a video of Ford smoking crack cocaine since neither outlet produced the video.

Stead argued that paying for footage is different than paying for an interview, which could be influenced by a payment. “Unlike paying a source for a personal story, which may or may not be true, you can see the video or photos yourself,” she wrote. “It is hard evidence that still needs as much verification as it can in terms of reporting, but is a tangible thing that the reader can judge.”

Stead called for transparency and verification when money is exchanged and suggested that payment for information should be handled on a case by case basis. “There cannot be a blanket ban or a blanket acceptance,” she wrote.

“Paying for information must remain the rarest of decisions. The bar must be for news of great public interest. It must be the only way to fully tell the story. And in every case, the news organization must explain to readers how much it has paid, to whom and why. If there is any squeamishness about being so upfront, it is a sign that the money should not be paid.”

Gawker says it didn’t have to pay for images

Despite The Globe and Mail‘s $10,000 payment, Gawker reported that it was able to obtain the photos in question without having to shell out cash.

Gawker’s Max Read said Gawker was offered the new video of Ford after receiving an e-mail from someone called “Jermaine.” The person wanted to sell the video and agreed to send screenshots of the video in an e-mail as evidence.

The screenshots showed some of the same images that The Globe and Mail paid $10,000 for, but Gawker got them for free.

Gawker didn’t publish the screenshots it got for free until after The Globe and Mail beat them to the punch with its purchased images.  Gawker was still trying to buy the video but get the seller down to a lower price.

The video’s seller originally wanted Gawker to hold “another charity drive. That would reach six figures” for the video.  (Last year, Gawker raised $200,000 to buy a separate older video purportedly showing Ford smoking crack. But, by the time Gawker raised the money, it couldn’t obtain the tape.)

Gawker’s Read said this week that in exchange for this new video, Gawker “offered him an amount in the mid four figures, or alternatively, a plan by which we’d pay him based on the page views the post received,” but there was no deal.

The seller later said he’d agree to sell the new video of Ford for less than six figures but then The Globe and Mail bought the images.