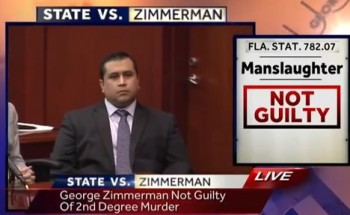 USA Today was apparently hoaxed by a source giving a fake name, “Howie Felterbush,” for a story about the verdict in the George Zimmerman case. Zimmerman was found not guilty of manslaughter or second degree murder in the death of Trayvon Martin.

USA Today had simply deleted from its story the source’s comments and any references to “Felterbush,” as of yesterday, June 14.  There is no longer any mention of “Felterbush” on USA Today’s website. However, an earlier version of the story on NBC-affiliate WXIA still showed the remarks.

Besides the questionable name “Howie Felterbush” (pronounced, how he felt her bush), another red flag could have been that the person masquerading as such would not allow USA Today to tape its interview with him.

The USA Today story, as published on WXIA’s website, reads:

“Howie Felterbush stood on the outskirts of the demonstration crowd, watching.

“‘Justice was rendered,’ he said. ‘That’s why we have trials instead of (verdicts based on) public opinion.’

“Felterbush was in Orlando earlier in the day and came to the courthouse to offer an opposing view. ‘That wasn’t to be had,’ he said. ‘There was 95% Trayvon supporters.’

“The Melbourne resident believes the jury made the right decision, but he didn’t say it very loudly. The 49-year old declined to be interviewed on video, saying he was uncomfortable because of the ‘state of things.'”

iMediaEthics wrote to USA Today asking for confirmation of the error and that it was hoaxed but had no response.

But, when we checked the USA Today story on its website this evening, an “Editor’s Note” had been appended to the story admitting that USA Today had been tricked.

“EDITOR’S NOTE: An earlier version of this story contained comments from a source whose name could not be verified.”

After KTVU realized it was hoaxed, the television station issued numerous apologies, but the airline has said it is still planning to sue over the “demeaning report,” an Asiana Airlines spokesperson told iMediaEthics yesterday.

Check out all of iMediaEthics’ stories on Trayvon Martin and George Zimmerman. iMediaEthics wrote last week about the publication of a crime scene photo of Martin’s dead body.