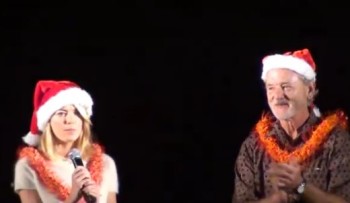 HuffPost wrongly said Hawaii was an "independent country" in an article about Emma Stone and Bill Murray, pictured above. (Credit :YouTube, "jazzbone8," screenshot)

Someone over at Huffington Post needs a brush-up lesson on geography.

In an article on Bill Murray and Emma Stone’s surprise visit to a Hawaii military base, the Huffington Post wrongly called Hawaii — one of the 50 United States — an “independent country.”

The correction, posted at the bottom of the article, reads:

“CORRECTION: A previous version of this article referred incorrectly to Hawaii as an independent country.”