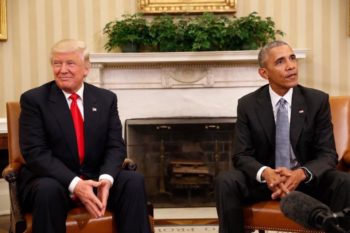 In the midst of the calling of the U.S. presidential election, the Huffington Post said it would stop posting its editor’s note about Donald Trump being a “serial liar, rampant xenophobe, racist, misogynist and birther.”

The Huffington Post began publishing an editor’s note on Trump-related stories back in January, which read:

“Editor’s note: Donald Trump regularly incites political violence and is a serial liar, rampant xenophobe, racist, misogynist and birther who has repeatedly pledged to ban all Muslims — 1.6 billion members of an entire religion — from entering the U.S.”

Huffington Post spokesperson Sujata Mitra told iMediaEthics by e-mail, “It’s always been our intention to drop it once the election cycle ended and he was no longer a candidate.” She noted that the Huffington Post had no discussion at all with Trump or his representatives regarding the matter.

The Huffington Post’s Washington bureau chief Ryan Grim sent a memo to staff explaining the Huffington Post was giving him a “clean slate” out of respect to the presidency, but would add it back on if he started acting inappropriately.

Politico reported on the memo, quoting Grim as saying:

“The thinking is that (assuming he wins) that he’s now president and we’re going to start with a clean slate. If he governs in a racist, misogynistic way, we reserve the right to add it back on. This would be giving respect to the office of the presidency which Trump and his backers never did.”

“But throughout the entire administration of Barack Obama, a segment of the Republican coalition, led by Trump, questioned the very legitimacy of his presidency, breaking from a long-held American tradition,” Grim wrote. “We’re not going to do the same. Whether we like it or not ― and let’s continue to be honest, we don’t ― he won the election. It was a win that was at once foreseeable ― yet one we failed badly to see.”

“Where we find fault in how Trump governs, we won’t hesitate to call it out. If he encroaches on the norms of our democracy, if he targets minority groups or other vulnerable elements of the population, we won’t hesitate to say so loudly and clearly. If he follows his worst instincts and caters to the klatch of white supremacists who endorsed him, we won’t flinch from calling him racist. But we have hope that the man we saw on the trail at his worst moments is not the man who will enter the White House.”