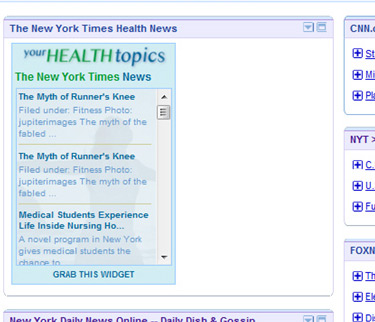 Developer David Pascual made iGoogle gadgets that tricked people into thinking they were selecting an authentic news feed from a name brand media outlet--they weren't. See his so-called "The New York Times News" gadget above as an example. The "health topics" headlines would route clicks to Pascual's dummy website--not to New York Times articles or The Times website. Pascual repeated this scheme using an astonishing volume of top media companies'magazine and newspaper trademarks--that is, until his recent take-down of his trick-ware that followed StinkyJournalism's investigation.

imediaethics’s investigation led to Pascual’s take down of iGoogle “Add ons” that tricked unwitting iGoogle users into signing-up for what they thought were news headline gadgets but instead directed them to his roster of websites in order to accrue click-based profits.

Our recent report titled: “iGoogle Gadget Grifter exposed Mr. Pascual’s parasitic scheme that hijacked the names and web traffic of many mainstream newspapers. After further investigation, the tally of victimized papers has mounted and a slew of major magazines were part of his prey was audacious, even staggering in its scope.

Turns out that Pascual pirated the names of almost every top newspaper in the country with his iGoogle gadget–a clear violation of Google’s policies, let alone copyright and trademark law. But the scheme didn’t stop at newspapers. Time Magazine, Newsweek, Rolling Stone, GQ, People Magazine, Oprah, The New Yorker, New York Magazine, Entertainment Weekly–even the National Enquirer to name a few, were all hijacked as well. It may be that the links to the newspaper and magazine gadgets are disabled now but how long has Pascual’s exploits been mooching off these titles? There’s no way to give the benefit of the doubt here. The dirty evidence to these link-farms is everywhere.

For our recent report, we caught up with Mr. Pascual and patted him on the back for answering a few questions and disabling the iGoogle gadgets after we informed The New York Daily News and they contacted him. He characterizes himself as an innocent who faltered only when a computer glitch arose. Initially, we had no idea how deep the operation went.

He attempted to minimize the facts and played the ignorance card when he wrote, “There was never any intention of misleading the end user or infringing on any trademarks, and the gadgets in question only drove a tiny amount of traffic to the aggregation sites, none of which are profitable.” Yet all the headlines boldly commandeer magazine and newspaper names and bait users into thinking they are getting content from those respective titles. By the time they realize they’ve been tricked, Pascual has cashed in.

Pascual specifically downplays the NY Daily News case as an isolated oversight. “It was simply that, with the automated submission process of thousands of gadgets, a few slipped through that might cause confusion as to the source of the information.”

Pascual excuses his handiwork as like many other “sites that aggregate content from hundreds of sources over thousands of topics”.

While scores of newspapers and magazines got their dose of Pascual’s chicanery (Health Magazine, LA Weekly, The Financial Times,  USA TODAY, The Miami Herald, Boston Globe, Washington Post, L.A. Times, Chicago Tribune , The Wall Street Journal, The Dallas Morning News et. al  were breached) there are many smaller market papers (the ones desperate for each and every eyeball) that got taken for a ride. Both the barely distributed Detroit Free Press and Detroit News were sucker-punched by Pascual’s sports site Section55.com, his medical hub YourHealthTopics.com robbed The Philadelphia Inquirer, Baltimore Sun, The Houston Chronicle, and The Contra Costa Times.

Pascual even pirated The San Francisco Chronicle  even though the newspaper published a favorable article about him last year. See a photo that appears in the report showing a relaxed Pascual sitting with his colleague Jim Nicholson at their former San Francisco-based offices working their magic. Pascual chutzpah lead him to siphon off Chronicle readers with his iGoogle Gadget just like all the others.

As mentioned earlier, after imediaethics tracked Pascual down, and alerted him, along with The New York Daily News, to his malfeasance, he immediately disabled the gadgets. We’re not talking about a few. We counted scores. For almost every news outlet whose name was stolen, multiple gadgets were offered in the “Add stuff” list. See The New York Times for example. There are five Pascual gadgets on this page for the Times alone.

The gadgets are defunct but their fingerprints still reside online for now. “As soon as the issue was pointed out, any gadgets that could lead to confusion were promptly disabled,” wrote Pascual, adding that it’s Google that must erase the gadgets. “I am waiting on Google to remove them from the directory entirely.”

Despite Pascual’s efforts to reverse his wrongs—which we commend—Google has yet to strip the defunct faux news gadgets away for anybody to select. So far, we haven’t found one instance where his gadgets still work without an error message after being selected from the iGoogle menu. However, leaving them up is akin to the Medical Examiner not taking away the corpses from the crime scene. And the stench is getting, well, stinky, so we emailed Google.

Anne Espiritu, Google’s Global Communications & Public Affairs, wrote back: “I’ve forwarded your note to the gadgets team and they are looking into it.”