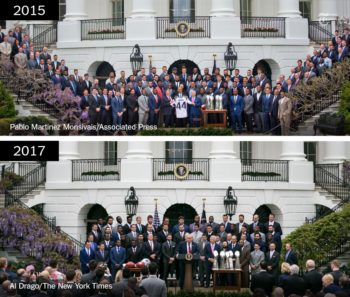 The New York Times's sports desk tweeted this comparison of the 2015 and 2017 attendance of the New England Patriots at the White House. The Times later updated to note that the 2015 picture showed staff as well as players and coaches, whereas the 2017 photo didn't show staff.

The New York Times sports desk tweeted pictures comparing the size of the New England Patriots’ turnout at the White House in 2015 and in 2017, visually indicating that many more Patriots visited the White House under Pres. Obama than Pres. Trump.

But, it wasn’t a fair comparison: the photo showing more players in 2015 also showed staff as well as players, whereas the 2017 photo only featured players.

The Patriots called the Times out on the misleading comparison, as did Trump.

The Patriots tweeted that “in 2015, over 40 football staff were on the stairs,” but this year “they were seated on the South Lawn.” The Patriots added that this year 34 players attended and in 2015, 36 did, so the number of players was similar.

iMediaEthics has written to the Patriots to ask if the team is satisfied with the Times’ response to its complaints.

The Times has since posted an updated tweet about the matter acknowledging that the Patriots says its “total delegation” to the White House in 2015 and 2017 “was roughly the same.”

A separate Times news story reported that “two dozen or more other players,” including Tom Brady, didn’t attend the White House ceremony. That article carries a correction regarding the crowd sizes which reads:

“An earlier version of this article included photos comparing the size of the Patriots’ gathering at the White House in 2015 and the gathering on Wednesday. The photo from Wednesday only showed players and coaches; the 2015 photo showed players, coaches and support staff and has been removed.”

The sports editor, Jason Stallman, admitted to making a “blunder.” In a statement to Yahoo News, Stallman said it was a “bad tweet by me. Terrible tweet.”

“I’m an idiot. It was my idea, it was my execution, it was my blunder,” he went on. “I made a decision in about four minutes that clearly warranted much more time. Once we learned more, we tried to fix everything as much as possible as swiftly as possible and as transparently as possible. Of course, at that point the damage was done. I just needed to own it.”

iMediaEthics asked Stallman how the error occurred and if the Times has been in touch with the Patriots, but Stallman told iMediaEthics he was declining to comment further.

Trump tweeted that the Times “just got caught in a big lie.”

Failing @nytimes, which has been calling me wrong for two years, just got caught in a big lie concerning New England Patriots visit to W.H.