In real life, Women lawyers and Judge, So why did Toronto Star's Ghomeshi C

In real life, the lawyers and judge were women, so why did Toronto Star’s Ghomeshi Cartoon depict them as Men? 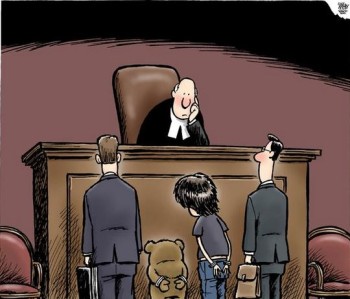 In the real court case, two female lawyers and a woman judge –not men–dominated the visual court scene. So why did a  Toronto Star editorial cartoon replace the three women with men in a depiction of the Jian Ghomeshi sex abuser case, Star readers complained.

The cartoon by Theo Moudakis, “Court Appearance,” showed Jian Ghomeshi, the fired CBC host charged last week with four counts of sexual assault and one count of choking, flanked by two male lawyers in front of a male judge.

Toronto Star public editor Kathy English responded to complaints of sexism that resulted in a Nov. 28 column. English told iMediaEthics by e-mail that the Star received complaints via e-mail, social media and letters to the editor.

“I thought it was a substantial issue to explore and explain,” she wrote.

English pointed out that “no editorial cartoon should be taken literally” as “an accurate depiction of events.” For example, she noted that Ghomeshi was not handcuffed when he appeared in court and he didn’t bring a teddy bear with him as is depicted in the cartoon, a reference to multiple victims saying that Ghomeshi showed them “Big Ears Teddy,” his teddy bear.

iMediaEthics notes that her point is that the handcuffs and teddy bear have meaning and enter symbolism into the cartoon from the realm of what is real.

iMediaEthics spoke with Moudakis about the cartoon. He said neither he nor his editor received any complaints but he believes the Star received a couple of complaints in addition to Twitter complaints.

When asked why the women in the courtroom were depicted as men, Moudakis told iMediaEthics that it was an “oversight.”  Moudakis said he started to draw the cartoon before the court hearing even happened and sketched in men in the background. Then, after the hearing actually happened, “I didn’t even think to change the lawyers,” he said.

“There was nothing deliberate about it,” he said.

Outside of complaints over the women being shown as men, Moudakuis said he has received “loads of compliments.” He also told iMediaEthics the Twitter reaction to his cartoon inspired one of his cartoons this week. (Below).

In her column, English defended the cartoon against calls “for the Star to retract the cartoon and apologize to [Ghomeshi lawyer Marie] Henein,” but said she understands why readers were upset that his lawyers, Marie Henein and Danielle Robitaille, were shown as men.

Despite the lack of “sensitivity,” she claimed “there is no clear violation of Star policy.”

Moudakis, the cartoonist, admitted “it was a bad decision” to draw men instead of women, but said his cartoon was “focused on the bear and Ghomeshi.”

“A cartoonist makes judgment calls, sometimes questionably, on how to most quickly and effectively make his point for humour’s sake. I was focused on the bear and Ghomeshi, and didn’t give much thought to the background of the cartoon,” he told English.

Ghomeshi ended his libel and breach of trust lawsuit against his former employer CBC this past week, as iMediaEthics reported. He is still pursuing a complaint against CBC through the Canadian Media Guild.

In real life, the lawyers and judge were women, so why did Toronto Star’s Ghomeshi Cartoon depict them as Men?