India's Vice President: Watchdog Journalism 'Should be the Rule'

India’s Vice President: Watchdog Journalism ‘Should be the Rule’ 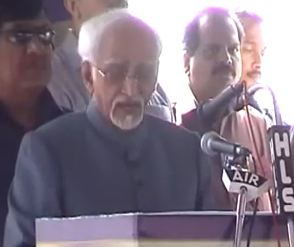 India’s vice president Hamid Ansari said at a New Delhi journalism awards ceremony that watchdog journalism “should be the rule and not the exception that it has become,” according to Express India.

Ansari claimed media bias has led to “sunshine journalism,” or reporting positive information in place of the real issues.

Ansari called for journalists to “take the initiative” and proactively handle media ethics issues. He also suggested that the influence of marketing and media ownership in journalism are areas of concern. Read more on Ansari’s comments here.

We wrote earlier this month when Ansari and India’s prime minister Manmohan Singh called for India’s journalists to avoid sensationalism in reporting.

India’s Vice President: Watchdog Journalism ‘Should be the Rule’