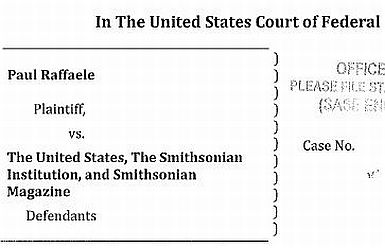 EXCLUSIVE: Freelance journalist Paul Raffaele is suing the United States, the Smithsonian Institution and Smithsonian magazine for breach of contract.

Raffaele, a former freelance feature writer for Smithsonian, believed the magazine had agreed to provide insurance for him in case of an accident while on dangerous assignments but, only after being seriously injured in Afghanistan in 2008, did he find out the Smithsonian Institution disagreed.

The United States is included in the lawsuit, which was filed April 19, because the Smithsonian Institution is a federal body, Raffaele said in a phone interview with iMediaEthics.

Raffaele’s serious brain and other injuries resulted while on assignment in Afghanistan for Smithsonian in April 2008.  Raffaele says that his editor at Smithsonian, Carey Winfrey, had verbally promised him insurance.  And, while Smithsonian did pay for Raffaele to get out of Afghanistan after the attack, the magazine has not paid for his care afterward or the resulting and continuing physical disabilities that prevent him from working as before. The Smithsonian also paid Raffaele his story fee and expenses after he struggled to complete and file the story.

He described his injuries to iMediaEthics by email. “…I heard a loud metallic sound, a light flash and then the light dimmed to semi-darkness. I felt a very strong pain in my right elbow where I later learned a piece of shrapnel from the bomb entered…I felt a dripping at the back on my neck, put up a hand expecting to feel solid skull and only felt mush. It was where the shrapnel smashed into the brain.”

“I trust the judge, I trust that he’ll see in his view what is right and if he doesn’t favor me, that’s life…and I’ll just move on,” Raffaele said.  But, he said he can’t expect to know how he’s going to have closure with the Smithsonian or Winfrey when it’s all said and done.  For now, he’s focusing on his intentions of getting justice and taking each day as it comes.

Raffaele hopes that, outside of securing his own claim, his lawsuit and case can make public aware of the unethical conditions under which some freelancers work.

“In a secondary way, it’s me making a stand on behalf of journalists who are freelancers and have to go to these dangerous places to get proper conditions,” Raffaele said.  He said he thinks publications should treat freelancers the same way they would any employee

Raffaele said that Winfrey promised him insurance before he went to Afghanistan, but “I’ve seen now firsthand what the word of the employer in a situation like this can be,” Raffaele said. “It means nothing. Once there’s trouble there’s nothing.” Raffaele said he didn’t ask Winfrey to put his promise in writing because after working successfully together for four years with his role as a featured writer, they established trust.  “I come from a generation of Australians, and maybe Americans in that case, that your word is as good as a signature,” Raffaele said.

Raffaele said that when he first mentioned being forced to begin legal action against the Smithsonian after it turned out there was no insurance and they refused to help him further, Smithsonian threatened to sue him for the $17,900 they spent getting him out of Afghanistan.  “They thought I suppose that could cow me,” Raffaele said.  “They [their lawyers] should have asked Mr. Winfrey about what kind of person I am.”

Raffaele listed that he went into an Afghan war field, and other dangerous situations for  Smithsonian over the course of four years.  “Surely they should have known that this dirty threat [to sue him for thousands of dollars for his medical evacuation costs] by their lawyer wouldn’t have cowed me.”

Raffaele said he hopes other freelancers will “stand up and demand their rights when they’re being sent into a war zone.”

“This was a tragedy for me,” Raffaele said.  “This was a magazine that suited me more than any other magazine in the world, and that’s why I gave everything to it – my heart, my soul, and eventually my body.”

iMediaEthics has contacted Raffaele’s lawyer and the Smithsonian Institution for more details and will post any response.