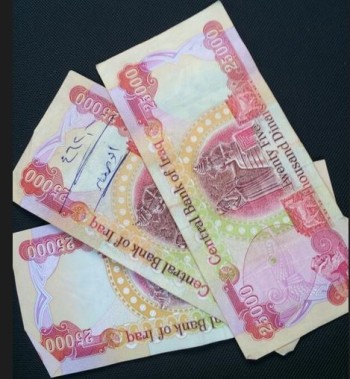 NYT's Rod Nordland tweeted this picture of money he said was given out to journalists attending an Iraqi press conference (Credit: Twitter)

“I would like to apologize to any of you who felt my criticism of bribe-taking by some of your colleagues was intended as a blanket condemnation of all Iraqi journalists,” he wrote in a letter he shared on Twitter.

My apologies to Iraqi journalists who are blameless, which I’m sure is most of them. pic.twitter.com/HNGfESd5NF

iMediaEthics asked Nordland what prompted his apology. He wrote by e-mail, “mistranslations that suggested I thought all iraqi journalists were corrupt.”

We also asked if he’s seen journalists being paid at other Iraq press conferences.

“I’ve since heard that it’s very very common,” he responded.

In the apology statement, Nordland claimed his comments “were intended as satirical and directed against what I would hope is a small group who are willing to accept such payments.”

He added, “I have worked with many Iraqi journalists over the years, and am doing so now, and have found most of them honest and above reproach, and would never have made any comment intended to include them in my criticism. Please accept my sincere regrets for any offense I have given to all of you who are blameless.”

In one tweet, Nordland claimed the “entire press corps bribed.” As evidence, he showed a picture of an envelope with cash in it.

He added that he’s “returning” the cash, but “not a single colleague rejected it.”

Even whores don’t sell themselves this cheap in Iraq. pic.twitter.com/fVNqyKS43c

Nordland told iMediaEthics the other two Times employees at the conference were an Iraqi translator and a photographer. In his tweets, he said they returned the money.

For the record we ‘re returning it. Not a single colleague rejected it, alas. pic.twitter.com/fKTzEUBBuK

Further, he noted that at the conference, Gen. Atta only “took three questions.”

How much does an Iraqi journalist cost? $20.83. pic.twitter.com/G9PXPqQNzA

In a June 30 tweet, he clarified that he wasn’t slamming all Iraqi journalists, just the ones who are bribed.

Many Iraqi journalists are honest and brave professionals who would not take bribes; my remarks were aimed at those who do.
— Rod Nordland (@rodnordland) June 29, 2014

Adding to his comments about the payments, Nordland tweeted June 30:

Many Iraqi journalists complain that cash payments are modest sums to cover phone and travel costs not paid by their outlets.

iMediaEthics has written to the New York Times  to ask what prompted the apology and if it approved Nordlund’s statement before its release.