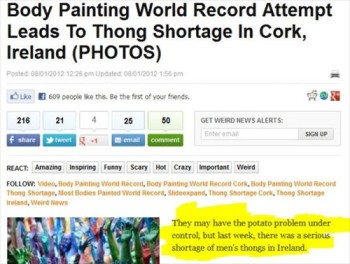 “They may have the potato problem under control, but last week, there was a serious shortage of men’s thongs in Ireland.”

The “potato problem” as Hanson blithely put it, refers to the Irish Potato Famine which was responsible for the death of an estimated 1 to 1.5 million people, approximately 12% of the population from 1846 to 1849. The Famine was triggered by a fungus, referred to as “the blight,” that destroyed potato crops. However, racist British laws forbidding Irish Catholics from purchasing land and holding professional jobs as well as inadequate relief efforts by England are largely blamed for the extent of the horrors.  The Famine is sometimes referred to as the Irish Holocaust.

The death of one million people by starvation is a joke to The Huffington Post?

Hanson goes on to tell the story of Keira O’Connell, who organized a July 28 effort to break that the world record for ‘”Most Bodies Painted.”

At the end of the article, Hanson gives a Hat Tip to Fark.com, which published July 31 a headline, “Outrage erupts in Ireland over shortage of: A) Whiskey B) Potatoes or C) Thong underwear.”  The Fark headline links to the Irish Examiner‘s July 28 article “Shortage of male thongs sparks panic in Cork” written by Nick Bramhill. The thong shortage in stores was caused by the Guinness World Record officials’ requirement that participants remove all clothing except for underwear, the Examiner explained.

Fark not only makes a joke out of a tragic event in world history but adds insult to injury with the stereotype of Irish people being alcoholics.  At least the Huffington Post managed to leave that part out.

We wrote to Bramhill to confirm if the Irish Examiner had originally published the headline “Outrage erupts in Ireland over shortage of: A) Whiskey B) Potatoes or C) Thong underwear.”  The Examiner’s news desk responded (emphasis theirs):  “Answer: NO”

Although scandals in the media involving racism are not rare, such blatent flaunting of stereotypes is different. Can you imagine any other oppressed group of people being subjected to such a racist headline or lede?  What would be the reaction to a similar headline involving African Americans “Outrage Erupts in Harlem over shoratage of A) fried chicken B) watermelon or C) thongs” or Jewish people “They may have the gas chamber problem under control but in Israel last week….”  Fark nor the Huffington Post would dare publish such a thing (one hopes), so why do they feel like the Irish people are fair game?

We contacted Kevin Smith, former president of the Society of Professional Journalists and current chair of SPJ’s Ethics Committee. He commented:

“I’d say that it’s in poor taste and does evoke stereotypes. Run the same process across racial or cultural lines and I think you can see a clear ethical mistake. Blacks with watermelon and chicken. Jews, Muslims, Latinos, you can link insensitive and stereotypical traits to all. Not appropriate.

“I believe we often think being clever with phrases, headlines makes them more enticing to readers. While that’s true, keep in mind bad attention is nonetheless attention and some people will gladly employ it if attention is their desire.”

It is clear that Hanson, the editors at Huffington Post and Fark.com have made a grievous mistake by publishing a racist and insensitive headline and lede.  The question is what will their response be now that they have been called on it?

We are contacting Huffington and Fark for comment and will update with any response.