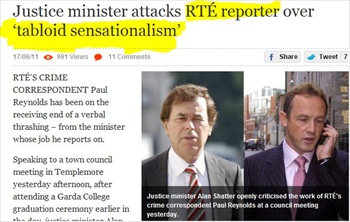 “I inappropriately responded by making comments about Paul [Reynolds], which I now regret and acknowledge were unfair and inaccurate,” Shatter said.

Prior to Shatter’s apology, an RTÉ spokesperson defended Reynolds, saying that his “work stands for itself,” the Irish Times reported.