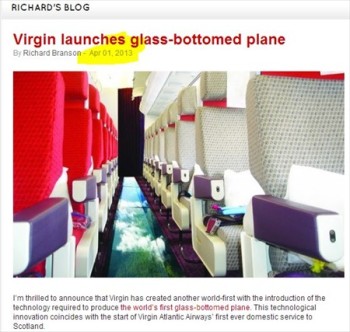 Was the UK Daily Mirror hoaxed by an April Fools’ joke?

In an April 1 story, the Mirror reported on Virgin Atlantic Airways’s announcement that it was going to premiere a plane with a glass floor.  But the Mirror ONLY added a disclosure that the story was an April Fools’ Day hoax almost eight hours after publication.

The Mirror’s original story on the glass-bottomed planes was written as fact with no apparent disclosure that the Mirror was in on the joke. The article doesn’t name any sources but does link to and quote Richard Branson from Virgin’s announcement blogpost on the planes.

Virgin’s fake announcement was first posted on Virgin Atlantic’s website by its founder Branson. A quick look at the comments section on Branson’s post shows his readers were quick on the take to spot a phony story.

The Mirror published its story at 7:38 AM with no disclosure that it knew the story was an April Fools’ prank. (Credit: Mirror, screenshot, highlight added)

While it was published at 7:38 AM UK time, in an update posted to the story at 3 PM, the Mirror added that the story was phony. That update reads:

“3pm update – If you hadn’t guessed, this was an April Fool. Happy Easter!”

But at 3 PM the Mirror added a note that the story wasn’t real. Was the paper in on the prank, or pranked itself? (Credit: Mirror, screenshot)

iMediaEthics asked the Mirror about its story.  The Mirror’s Ben Rankin denied the site had been hoaxed, writing in an email to iMediaEthics:

“Have you heard of April Fools’ Day? It was a joke story supplied by Virgin. And a good one. No-one has been hoaxed!”

We’ve followed up asking Rankin why the Mirror added the April Fools’ disclosure almost eight hours after publication if it hadn’t been hoaxed.  iMediaEthics has also written to Virgin Atlantic asking if it had any comment about the Mirror’s story and if any media outlets contacted them for fact checking or confirmation of Branson’s blogpost. We’ll update with any responses.

Several news outlets were hoaxed by an April Fools’ Day prank from the French mail service La Poste and company Parrot.  La Poste published a press release a couple days before April 1 claiming it was going to start using Parrot’s drones to deliver newspapers. But, the story was a phony, a Parrot spokesperson confirmed to iMediaEthics, and several news outlets were left with egg on their faces.

Check out iMediaEthics’ other stories on April Fools’ hoaxes.

How to report on Sudden Infant Deaths: New Guidance from the UK
New hacking lawsuits against Mirror, Sun publishers