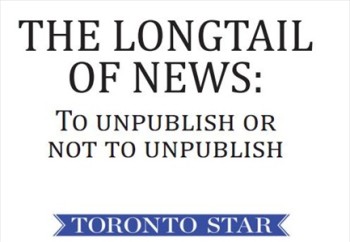 iMediaEthics reviewed studies and interviewed experts on what the best practices are for reporting on police records, unpublishing, and following up. One study we looked at was Kathy English's 2009 "The Longtail of News: To Unpublish or Not to Unpublish."

We consulted both scholars and studies for advice on what legality and best practices college newspapers can adopt to serve the public interest while still minimizing harm to students.  Scholars like Toronto Star  public editor Kathy English have examined the unpublishing question before.  English published a 2009 study entitled “The longtail of news: To unpublish or not to unpublish,” which examined the unpublishing practices of 110 newspapers.

A 2007 study entitled “How America’s community newspapers handle (or don’t handle) their ‘digital attics’” by Larry Timbs, Doug Fisher, and Will Atkinson explored the ethical issue of whether newspapers should unpublish, based on the practices of 63 newspapers.

And last year, iMediaEthics talked to several editors about whether newspapers should “delete published police records.”

iMediaEthics asked scholars if college newspapers should publish students’ names in the first place. And if newspapers do publish student names, what steps can they take to “minimize harm,” as the Society of Professional Journalists’ ethics code dictates?

Newspapers may consider themselves the “first draft” of the public record, the study explained. This may dictate that newspapers publish and maintain public information, such as information about crime suspects.

However, the SPJ ethics code states that journalists must:

iMediaEthics asks, how can newspapers determine if there is an “overriding public need” to publish personal information, such as a criminal suspect’s identity?

Fisher, an author of the 2007 study and a senior instructor at the University of South Carolina School of Journalism and Mass Communications, told iMediaEthics email that there might be a “civic interest” in knowing the identity of people who are involved in all types of crime.

“Is there a degree of severity or timeliness that should be taken into account? Probably. But the very nature of the question defies setting absolutes, which is why editors and reporters struggle with it regularly.”

Student Press Law Center’s Frank LoMonte told iMediaEthics in an e-mail that SPLC does not have a “one-size-fits-all policy for police items,” and each college newspaper must make its own deciding whether to report names.

Some papers will identify a student only by age and state their alleged crime instead of reporting their name, he wrote.

“If the editors decide that there is no newsworthy public interest in the identity of a person who has committed a minor infraction, then it would be a good exercise of news judgment to make it a ‘blind’ item with just a description and no names,” he wrote.  He added:

“It is hard to see why it is of great public importance to know the identity of a teenager who got caught with a beer.”

In spite of a police report’s potential inaccuracy, iMediaEthics notes that some college papers may opt in favor of publishing students’ names, in order to avoid having to “set absolutes.”

But, the issue isn’t just that newspapers publish these students’ names.  College newspapers’ websites document these initial reports of alleged arrests, tickets, and so forth. And, as has been much written, Google search is much more accessible than those old microfiches. Given the permanence of online crime reports, should newspapers agree — or offer — to delete (unpublish) crime reports from their websites?

Newspapers may follow a “halfway policy” which allows papers to publish names in print, but leave the police blotter archives off the website, SPLC’s LoMonte wrote to iMediaEthics.

“That can be a legitimate compromise position that still preserves the historical record while eliminating some of the search-engine anxiety that people have regarding their reputations,” he said.

Fisher recommended that newspapers set up a policy that determines who will make the decision of whether to unpublish a student’s name.

“Even if you are going to turn the request down, you want the requester to feel there is a clear path of command and someone in charge. It’s when they don’t feel that command that people start to get upset,” he wrote.

In addition, newspapers should have an internal dialogue about their position on the issue. He recommended that they ask certain questions, such as:

The Importance of Follow-Up

Fisher also said that newspapers have “a certain moral responsibility” to follow up on crimes they have reported.

“Throw off the false yoke of ‘we can’t possibly follow up on everything,’” he suggested.

“The real translation of ‘we can’t follow up’ is ‘it’s too expensive – the arrests are easy because they’re practically – or actually – given to us daily, while we would have to work to find out what happened.’ The public can see through that for what it is,” he noted.

iMediaEthics noted in a 2010 report that “instead of deleting or removing reports, the editors iMediaEthics spoke with advocating adding follow-up notes or corrective posts.

Kathy English suggested in her 2009 study “The longtail of news: To unpublish or not to unpublish” that editors respond to unpublishing requests by stating that they will “do a follow-up story” to report any “relevant new information.”

Newspapers often publish regular police blotters as a weekly or daily roundup of local crime. College newspapers may focus on local crime, campus crime, or both.

Newspapers commonly obtain the information for a police blotter from local or campus police records, which are available to the media under public records laws, according to the First Amendment Handbook, which was compiled by Reporters Committee for Freedom of the Press.

Therefore, newspapers are not violating the law by printing the information contained in a police report, according to the First Amendment Handbook.

“If information comes from a public record, such as a birth certificate, police report or judicial proceeding, the media usually are not liable for reporting it,” the handbook reads.

First Amendent law dictates that newspapers are legally allowed to publish public information.  The 1966 national Freedom of Information Act (FOIA) specifies that records from “government agencies,” including “law enforcement,” are public, with several exemptions. These records are exempt from disclosure if it would “interfere with enforcement proceedings,” put an investigation at risk, qualify as an “unwarranted invasion of personal privacy,” or “endanger the life or physical safety of any individual.” The Brechner Center for Freedom of Information at the University of Florida provides more information on freedom on information legislation (see here).

Each state has its own specifications for enforcing FOIA as well as outlining what specific information should be available on a public record, according to the National Freedom of Information Coalition.

iMediaEthics notes that the availability of information on police reports may vary by state, depending on local and state laws.

However, publishing this information raises thorny ethical questions that newspapers must consider as they establish their crime reporting policies.