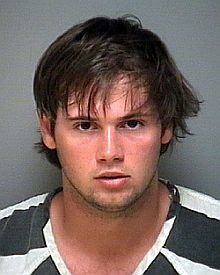 Government handout of mug shot of George Huguely, a suspect in the murder of a University of Virginia classmate and girlfriend, Yeardley Love.

The New York Daily News and other mainstream media outlets are using anonymous sources to characterize the past behavior of George Huguely, a suspect in the murder of a University of Virginia classmate. And, while the Daily News provided a bit of an explanation for why sources weren’t named, the question still remains: was the information acceptable to spread?

Huguely has been charged with first-degree murder in the death of Yeardley Love, ESPN reported.  Both were seniors at the University of Virginia and played lacrosse. Love was found dead May 3 in her apartment.

While People.com repeated the anonymous quotes in the Daily News, demonstrating how such information once reported can spread, other media outlets have reported incidents involving Huguely that have tangible evidence–such as police reports and reports of a Taser being used on him, for example.

Specifically, The Daily News reported May 6 that a friend of Huguely’s said Huguely “partied real hard and when he was drunk or f—– up, he could be violent.  He would get out of control.”  That same person called him “obsessive.”

Another friend, a former University of Virginia undergraduate who was friends with Huguely and Love, “described a disturbing incident in which Huguely recently reportedly attacked Love.”  The person said Huguely was “really messed up.”

The New York Daily News also reported a recent “physical altercation” between Huguely and Love. But the Daily News wasn’t alone in reporting the incident.

The New York Times also wrote May 6 about the incident with two unnamed university athletes as sources. But, The New York Times did leave out some of the extra quotes and descriptions of Huguely’s behavior the New York Daily News published.

The Daily News itself reported May 7 that “an ugly image of abuse by Huguely, who remains in a local jail, has come into focus.”

In its May 6 report, the Daily News noted that UVA lacrosse players “adhered to the code of silence” and refused to comment on their former teammate, Huguely.  Also, the Daily News said that “many people close to Huguely and Love would not talk to the press unless they were granted anonymity, saying they didn’t want to alienate their teammates and friends.”

The Society of Professional Journalists’ code of ethics advises journalists to “identify sources whenever feasible,” so that the public can weigh how reliable the source is.

Hoyt went on to write, “When the comments are anonymous, the potential unfairness can be compounded because readers have no way to evaluate the motives or credibility of those doing the talking.”