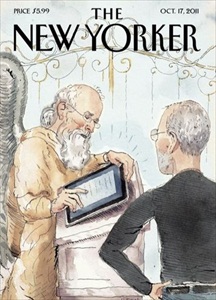 Steve Jobs, the Apple co-founder, died Oct. 5.  Stories on Jobs have dominated news coverage in the days after.

But Gossip Cop questioned the New Yorker’s Oct. 17 cover, which shows “Jobs, in his famous black turtleneck, arriving at Heaven’s “pearly gates,” where St. Peter is shown checking an iPad.”

As outlined by Gossip Cop, the cover has been criticized because Jobs was Buddhist and therefore the Christian elements of the cover are ” an insult to his personal spiritual convictions.”

“I’m sure New Yorker means well by devoting a cover to Apple’s co-founder, but this illustration smacks of ignorance. Yes, the New Yorker’s known for satire, but is this really the right way to approach it before his family’s even held services for him? How about showing Steve Jobs a little respect by at least depicting him with a religious idol he’s believed in?”

Gotta Be Mobile noted that the New Yorker would likely not reverse the religions — for example by showing a Christian in a Buddhist ceremony.