It's a fake OpEd! I did not write for China Daily, says Journo - iMediaEthics

It’s a fake OpEd! I did not write for China Daily, says Journo 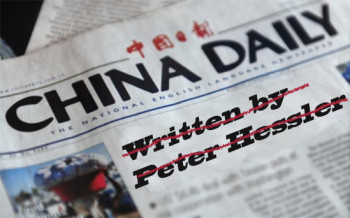 Peter Hessler, a staff writer for The New Yorker magazine, denies that he wrote a commentary comparing China and Egypt attributed to him by state-owned China Daily, the Wall Street Journal reported.

In a statement on Facebook, Hessler said he asked China Daily to unpublish and retract the Jan 19 op-ed. He explained that he was interviewed by China Daily with a former colleague but that he didn’t write the piece.

The commentary “appeared to praise various political aspects of China – where Mr. Hessler lived and worked for years, including at The Wall Street Journal –cited in contrast to Egypt, where he currently resides,” the Journal reported.

The piece was titled, “U.S. Observer: Comparing Egypt With China,” according to the New York Times. A link to the op-ed now goes to an error page. iMediaEthics viewed a cache of the article, which we uploaded here.  Atop the report was an editor’s note reading:

“Editor’s note: Peter Hessler is a staff writer at the New Yorker magazine, and a contributing writer at National Geographic. He is the author of four acclaimed books about China. In October 2011, Hessler and his family moved to Cairo, which provided him a good chance to closely observe the turmoil and revolutions happening in this Middle Eastern country in the past three years. Here he shares his unique perspective on the differences between Egypt and China.”

See below a screenshot of the now-unpublished op-ed.

In his Facebook post, Hessler complained about the commentary, noting “it omitted crucial parts, including the most important point: that I believe it’s harder to make a political change in China, where the system is deeper rooted than in Egypt, and thus the flaws are also more deeply rooted. I said that this is the reason why the current anti-corruption campaign will be a failure, because China is not addressing its systemic flaws. This material, among other things, was not included in the published article.”

In response to his complaints to China Daily, Hessler wrote that the newspaper did unpubish the English-language article “but Chinese translations have been picked up by various outlets. And the paper has refused to issue a retraction.”

He further distanced himself from the article, writing: “I want to emphasize that this article does not in any way represent a comprehensive picture of my views on China and Egypt, and I never would have agreed to such a story.”

iMediaEthics has contacted China Daily for comment and more information.

It’s a fake OpEd! I did not write for China Daily, says Journo