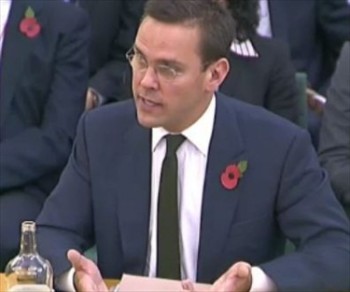 News Corp’s James Murdoch appeared Nov. 10 before Parliament for a second questioning about accusations against News Corp’s now-closed News of the World newspaper.  Murdoch rejected a Parliament member’s comparing him and News Corp. to the Mafia and commented that there is a possibility News Corp. may close the Sun newspaper as well.

The Guardian’s Roy Greenslade summed up Murdoch’s nearly “three hours before the committee” as this:  “There had been sins, for which he was duly sorry, but they were not his.”

According to the Guardian’s live blog of Murdoch’s testimony, Parliament members wanted to ask Murdoch about “apparent discrepancies in evidence he gave on phone hacking” in his July 2011 testimony.  Specifically, MPs want to know about evidence that indicated News of the World phone hacking wasn’t limited to just a “rogue reporter.”

During his Nov. 10 testimony, Murdoch denied that he was “shown counsels opinion” indicating “phone hacking was more widespread.”   He also claimed he didn’t know the importance of the “for Neville” e-mail, the Guardian reported.  According to the Los AngelesTimes:

“Murdoch told the committee that it was ‘not made clear to him”‘that the complete contents of the ‘For Neville’ email would indicate ‘wider-spread knowledge’ of phone hacking at the company. He claimed that he was only given information to approve an increase in a settlement offer over phone hacking, and that he was not shown an incriminating piece of evidence that has become pivotal to Parliament’s investigation.”

Watson read to Murdoch a “transcript” of a meeting with News of the World’s Neville Thurlbeck and Tom Crone in which Crone argues they had to provide Murdoch with the “For Neville” in order to make a settlement, according to the Guardian. As StinkyJournalism has written, former News of the World editor Colin Myler and former legal manager Tom Crone alleged in July that Murdoch misled Parliament by claiming he didn’t know about the “for Neville e-mail.” That e-mail contained “transcripts of 35 hacked messages” from Gordon Taylor’s phone.  News International shelled out $1.1 million to Taylor, head of the Professional Footballers Association, in 2009 to settle a case with Taylor.

“In July, he said he had no knowledge in 2008 of an e-mail containing damning evidence that phone hacking at the paper was not limited to one journalist or one incident, as the company asserted at the time. On Thursday, he acknowledged that in fact, he had been made aware of the existence of the e-mail, but insisted that no one told him what it actually contained.”

Crone and Myler told Parliament in September that “they clearly informed” Murdoch “of the seriousness of the contents of the so-called ‘For Neville’ e-mail,” as the Guardian wrote at the time.

According to the Guardian, Parliament member Tom Watson “accused the News Corp executive of being “the first mafia boss in history who did not know what was going on in his organisation.”

Murdoch also passed the blame for News Corp’s wrongs to other News Corp employees.  For example, Murdoch claimed that former Dow Jones CEO (and at the time News International’s CEO) Les Hinton made the decision to pay former News of the World reporter Clive Goodman a settlement and suggested that Hinton and Colin Myler  “should have told” him “if he had known that there was wider spread criminality.”   (Goodman was imprisoned for phone hacking in 2007.)  Murdoch claimed that the News of the World editor was responsible to tell him about “alleged illegal activity” and that he wouldn’t have been responsible.

Murdoch defended the company’s huge financial settlements by saying that he did know of “reasons ” and “evidence” for settling but “not evidence of wider phone hacking.”

Murdoch also defended himself from accusations that he “misled the committee.”  Instead he claimed Myler and Crone were responsible for misleading Parliament, the Guardian’s live blog reported.

“I believe his committee was given [evidence] by people without full possession of the facts or…it was economical. My own testimony has been consistent. I testify to this committee with as much clarity and transparency as I can,” Murdoch is quoted as telling the committee: “I believe their testimony was misleading and I dispute it” of Crone and Myler’s testimony.

In a statement published by the Guardian, Tom Crone criticized Murdoch for attempting to “discredit Colin Myler and myself.” He is quoted as saying that he did know about the “For Neville” email and “what it meant in terms of wider News of the World involvement.” He rejected Murdoch’s accusations that he “mislead the committee.”

Murdoch argued that despite the Guardian’s 2009 article “revealing there were thousands of victims of phone hacking,” the police quickly said “there was no new evidence.”  Murdoch is quoted as saying: “The answer came back very strongly. investigations had been made; inquiries had been made; previous investigations had been made and there was no new evidence at all.”  Murdoch did say that the company was slow to react to phone hacking allegations.

The New York Times reported that the parliamentary committee will create “a report for Parliament, possibly by the end of the year, and it would be up to the House of Commons to determine any sanctions as a result of the panel’s findings.”

Concerning the Sun newspaper, Murdoch said “I don’t think we can rule [out] any corporate reaction to behaviour or wrongdoing.” As StinkyJournalism wrote earlier this month, a UK Sun journalist, Jamie Pyatt, was arrested by UK police for questioning about accusations of bribery at News Corp’s UK newspapers. He was the first journalist from the Sun to be arrested.

According to the BBC, the UK police are reviewing 300 million News International emails and have interviewed 600 of 5,700 possible phone hacking victims. According to the UK police commissioner Sir Bernard Hogan-Howe, the police are trying to “thoroughly” review all the evidence.  The police have devoted “around 100 detectives” to investigating phone hacking, computer hacking and bribery.